VICTORIA -- Two protesters were arrested by VicPD Thursday as an occupation on the front steps of B.C.'s legislature building, in support of Wet’suwet’en hereditary chiefs, continues on to its fourth day.

The two individuals were arrested for mischief and were briefly held before being released.

Thursday morning began with an open call to all supporters for Wet’suwet’en hereditary chiefs to come down to the front steps of the legislative building for a ‘teach-in’ and day of action.

Around 10:30 a.m., two of the supporters of the movement — reportedly using chalk paint — sprayed messages to Premier John Horgan on the exterior of the legislature building and its driveway and walkways. 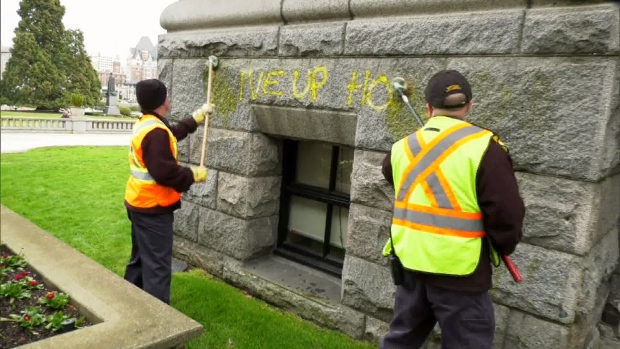 The two protesters were briefly detained and escorted off the grounds by VicPD members and Legislature Assembly Protection Services officers, but were released once it was discovered that the paint used was ‘water soluble’.

The pair was released on conditions, including not to return to the property.

Work is currently underway by legislature staff to remove the paint from the building.

Protest organizers say the intension of the teach-in was to educate people about the movement and to rally support.

“Day after day we have been here, sharing our songs in ceremony and doing so in a peaceful way, trying to facilitate dialogue between all peoples in order to address this issue that exists at the core of Canadian society,” said Kolin Sutherland-Wilson, one of the leaders of the Indigenous Youth for Wet’suwet’en.

“If you look at the way Canadians are reacting to this situation, there is so much violence, so much hate, we need to educate people on the issues.”

Following some lively speeches from the steps of the building, the group of nearly 100 made their way to the fountain on the front lawns of the property. There, red dye was poured into the water, to represent blood. 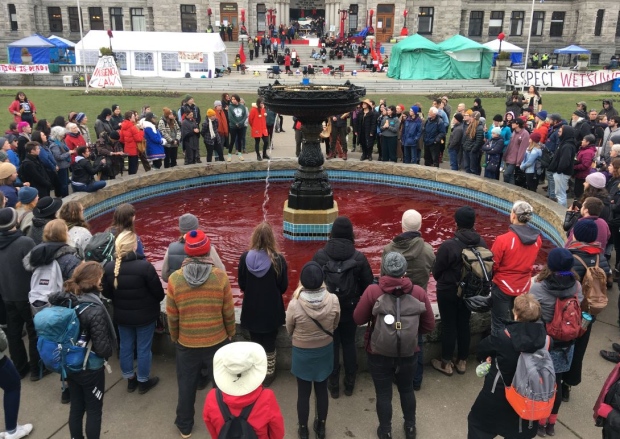 “We saw the fountain, right in front of the legislature turn into a large pool of blood,” said Sutherland-Wilson. “It is to represent the blood that is on Horgan’s hands.”

On Feb. 26, the protesters held a press conference on the steps of the building where they reiterated their list of demands before willingly vacating the government property. Among those demands were that all permits be pulled for the Coastal Gaslink pipeline project in northern B.C. and that RCMP patrols on Indigenous territories end.

Until those demands are met, the group promises to continue their demonstrations and occupations of government offices.