VICTORIA -- Traffic north of Victoria came to a standstill Wednesday afternoon as Indigenous protesters blocked a major highway out of the city.

Activists walked onto the Pat Bay Highway at Mount Newton Cross Road just before 2 p.m., cutting the main traffic link between Victoria and the upper Saanich Peninsula, including the BC Ferries terminal and the Victoria airport.

The B.C. Supreme Court quickly issued an injunction against the protest.

The injunction prohibited anyone from blocking the highway between Victoria and the Swartz Bay ferry terminal, including all ditches and highway off-ramps.

"The defendants, and all other person having knowledge of this order, are hereby restrained and prohibited from physically preventing, impeding, restraining, or in any way interfering of counselling others to interfere with the movement of vehicles, traffic and the traveling public in the designated area," the injunction said.

It is up to the discretion of police whether or not to enforce such injunctions by arresting or removing the protesters.

“If we go in and start pulling people out, we could have one of these every week,” said Central Saanich police spokesperson Sgt. Paul Brailey, when asked why officers chose not to make arrests.

Central Saanich police Deputy Chief Derren Lench said his officers would "allow for a peaceful protest and depending on how it flows will make an ongoing assessment if there is a need for enforcement action."

The department's Indigenous liaison officer was at the scene during the blockade, and 15 of the department's 23 officers were tasked with dealing with the issue, Brailey said.

Police diverted traffic onto Central Saanich Road and Lochside Drive, adjacent to the highway. Ferry sailings were not cancelled or delayed due to the protest, which ended at 5 p.m.

#YYJ Drivers: Police are directing traffic around this protest being held on the Pat Bay Highway by Central Saanich Road.

Protestors will be blocking this intersection until atleast 5 p.m. pic.twitter.com/lepI7ikyJs

The protest was planned in support of the Wet'suwet'en hereditary chiefs opposed to construction of the Coastal GasLink pipeline in northern B.C.

Social media posts asked attendees to bring signs and drums to the highway.

Saanich police and Central Saanich police said Tuesday they were aware of the planned action on the highway and will monitor the situation to update the public as it unfolds. 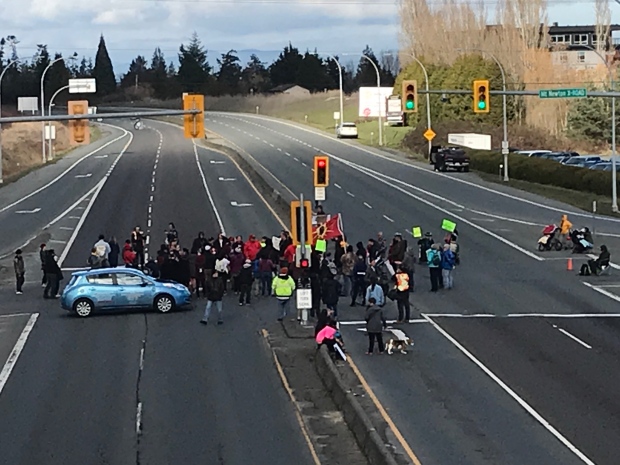 "The indication to us is it's around the Mount Newton area, which is where the Highway 17 cuts through the Tsawout First Nations reserve," said Central Saanich police Sgt. Paul Brailey.

Brailey advised motorists to avoid the area or take an alternate route, if possible.

He also encouraged protesters to use the overpass and highway shoulders to get their message across, instead of blocking the roadway, noting the intersection is a major access route for those trying to get to Saanich Peninsula Hospital.

Federal Transport Minister Marc Garneau said Tuesday that police would be "moving in" to respond to road and rail blockades sprouting up across Canada.

Following the protest, the Office of the Premier released a statement voicing disappointment over the highway blockade.

"It’s unfortunate we have not been able to come to agreement for a meeting with Wet’suwet’en Hereditary Chiefs at this time," read the statement.

"We had hoped the Hereditary Chiefs would agree to a period of peace and respect during the talks, which would include encouraging their supporters to remove blockades. We remain interested in meeting with Wet’suwet’en Hereditary Chiefs and will continue to engage with them and the Federal Government in hopes of finding a resolution." 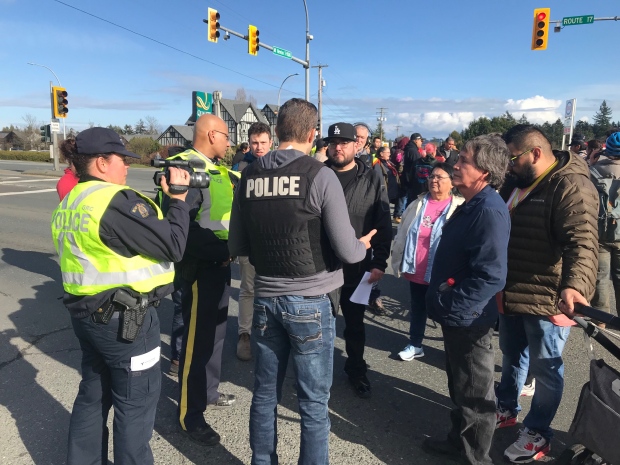 On Wednesday morning, a group of Indigenous youth who have been camping in front of the B.C. legislature in Victoria said ongoing protests and infrastructure blockades will continue.

In a public address from the steps of the legislature Wednesday, a coalition called Indigenous Youth for Wet’suwet’en said disruptions will go on until construction of a natural gas pipeline in northern B.C. is stopped.

The group spoke against the use of court injunctions to remove Indigenous protesters from the construction zone, saying "reconciliation is dead." 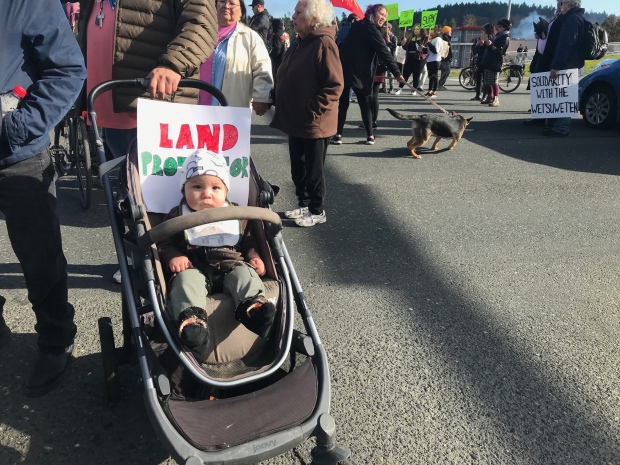 Speaker Ta’Kaiya Blaney said Indigenous people and their supporters will continue to occupy B.C. government offices and stage road blockades until the RCMP is withdrawn from the Wet'suwet'en territory and construction of the pipeline is stopped.