All eyes on Wet'suwet'en chiefs' meeting with federal, provincial ministers 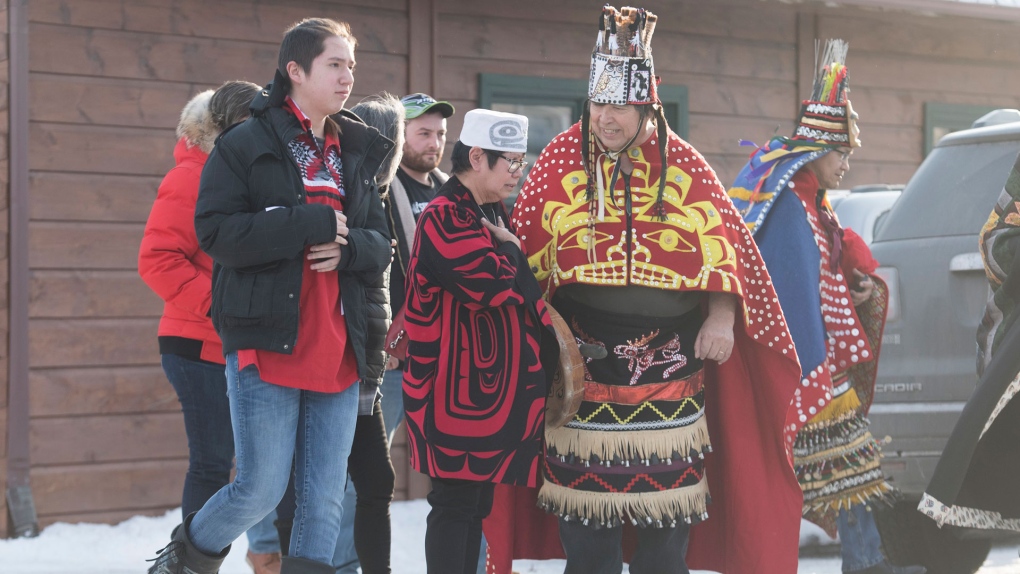 SMITHERS, B.C. -- The hereditary chiefs of the Wet'suwet'en prepared to sit down with senior government ministers on Thursday after two of its longstanding conditions were met for the duration of the scheduled talks.

As federal Crown-Indigenous Minister Carolyn Bennett and British Columbia Indigenous Affairs Minister Scott Fraser made their way to Smithers, B.C., for the long-sought talks, both the RCMP and Coastal GasLink said they agreed to conditions requested by the chiefs to allow the meetings to progress.

The chiefs praised the moves in a statement released shortly before the talks were expected to get underway.

“We believe these conditions provide the space we need to be able to sit down at the table in good faith and a positive path forward,” the statement read.

“We are so close and have called on the provincial and federal governments to support this de-escalation of activities so that this issue can be resolved.”

The chiefs said the meeting with Bennett and Fraser is a “first step,” noting both Prime Minister Justin Trudeau and B.C. Premier John Horgan declined invitations to discuss the long-simmering issues that have gained fresh urgency in recent weeks.

The chiefs' opposition to a natural gas pipeline cutting across their traditional territory, coupled with their efforts to limit police presence on their lands, have sparked shows of support across the country that have shut down freight and passenger rail service for the past three weeks.

Both Bennett and Fraser said they hoped the meetings would pave the way to end the dispute and protests.

“We're looking forward to the meeting,” Bennett said moments after arriving in Smithers. “Obviously this is very important. We reaffirm our interest in talking to the Wet'suwet'en Nation and their issues of title and rights.”

Fraser largely echoed Bennett in a statement issued shortly before his departure for the meeting.

“We are pleased to have been able to arrange for further talks with Wet'suwet'en hereditary chiefs,” the statement read. “We are coming to the table with a commitment to respectful dialogue and are focused on finding a peaceful path forward.”

Horgan said he has met with the hereditary leaders twice over the past year and a half and is prepared to sit down with them again, but there need to be conditions for constructive dialogue.

Fraser understands the community's governance issues and Bennett represents the Crown in Canada, so the best way forward is for them to be at the table, he said.

“I think that this is a good step. I've been seeking peaceful dialogue for a couple of weeks and here we are,” he said. “I'm looking forward to harmony as a result of those discussions.”

Indigenous Services Minister Marc Miller said the meeting was a victory for open dialogue and peaceful resolution, but it is only the beginning as there are underlying rights and title issues that will take time to resolve.

The dispute over the Coastal GasLink pipeline project has been raging for months, but entered a new phase on Dec. 31, 2019, when the B.C. Supreme Court granted the company an injunction calling for the removal of any obstructions from any roads, bridges or work sites it has been authorized to use in Wet'suwet'en territory.

In Ottawa, one Conservative MP questioned Thursday whether the blockades constitute acts of terrorism.

The rookie MP said he was asking on behalf of a constituent who sent him an email after a handful of protesters in the Belleville area lit fires near and on railway tracks the day before - actions that were denounced by Trudeau.

“This resident wanted to know if the current illegal blockades that are happening across Canada are being deemed as a terrorist activity?” Shipley asked.

Blair said they were not, adding the government should not interfere with the police's ability to identify and investigate criminal activity in their jurisdiction.

“It's very appropriate that I be careful in doing that because I do not want to interfere with the operational independence of both the police and our prosecutors,” he said. “But at the same time that was terribly unsafe, deeply concerning.”

RCMP Commissioner Brenda Lucki testified at the same committee hearing, saying the Mounties have discretion on how to enforce an injunction.

“Of course, enforcement is the last option,” she said. “It's about dialogue and trying to find a peaceful resolution to the blockades.”

The Ontario Provincial Police took down a major blockade near Tyendinaga Mohawk Territory earlier this week. But about 20 demonstrators gathered near train tracks in Kingston, Ont., farther east along the same line, on Thursday morning.

Local police said the group gathered on the Canadian National Railway Co. overpass, but train traffic had not been affected and officers were monitoring the situation.

Police in Victoria said two protesters were arrested for mischief after using a substance to write messages that included profanity on the building, roadway and driveway of the B.C. legislature.