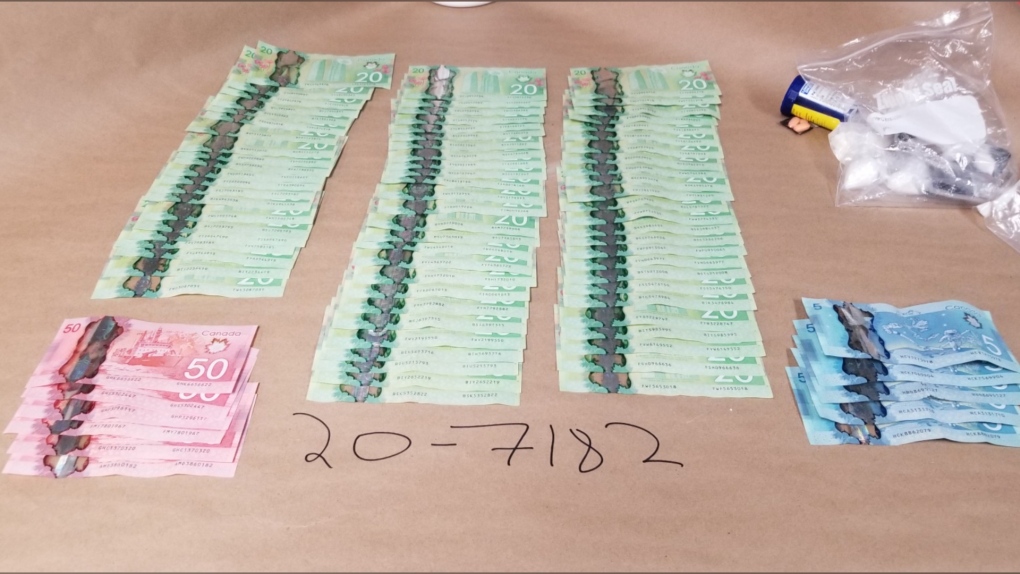 In addition to drugs, police discovered more than $1,000 in cash in the vehicle they stopped on April 2. (Saanich Police Department)

VANCOUVER -- Police in B.C.'s capital region say they've made three arrests for alleged drug trafficking in two separate incidents in the same area in less than a month.

The area in question is the 3400 block of Douglas Street, near the Uptown shopping centre in Saanich.

Saanich police say an officer was parked on the side of the road there around 2 a.m. Thursday, when a vehicle swerved and almost struck his police cruiser.

Suspecting the driver might be impaired, the officer pulled the vehicle over and noticed "a small package of drugs in plain sight," according to a news release from Saanich police.

During a search of the vehicle, police discovered more drugs, believed to be fentanyl, methamphetamine and cocaine, as well as "drug packaging materials" and "a conducted energy weapon."

Police arrested the driver - who failed a roadside sobriety test and received a 24-hour driving suspension - and a passenger. Both are now facing charges related to drug trafficking and possession of a weapon for a dangerous purpose, police said, adding that the vehicle was impounded.

That incident was similar to one that occurred on April 2, when police stopped a vehicle in the same area because of a weapons complaint. That driver was arrested, and police said they discovered methamphetamine and cocaine that were "packaged and ready for sale on the street" when they searched the vehicle.

Police also discovered more than $1,000 in cash in the vehicle.

That driver is now facing charges related to drug trafficking and driving while prohibited, police said.

The two incidents are not believed to be related, but serve as a reminder that drug trafficking has continued during the COVID-19 pandemic, said Saanich police spokesperson Const. Markus Anastasiades.

He said decreased traffic on the roads, especially at night, has made suspected drug traffickers "stand out" to police officers a bit more than usual.