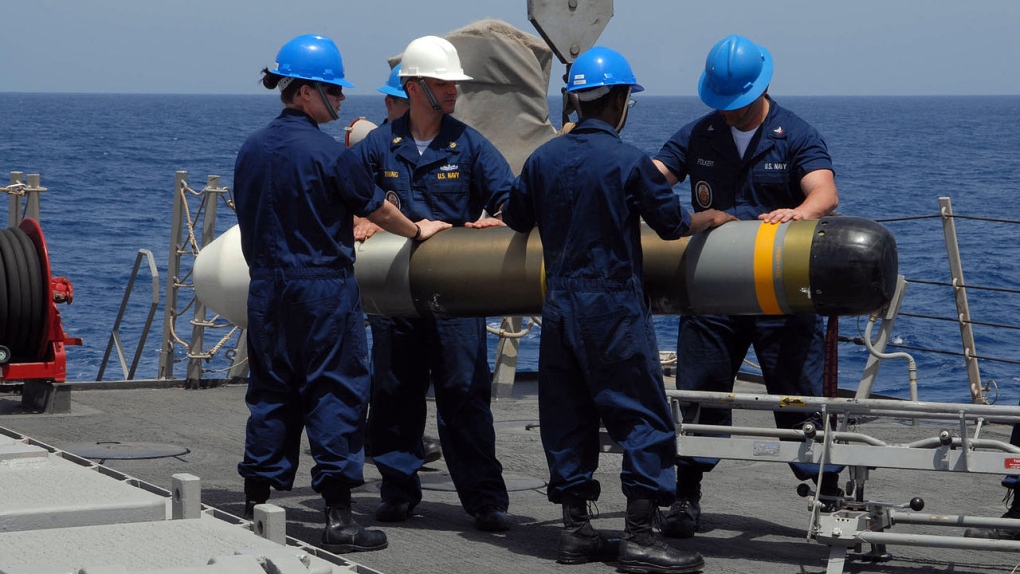 The Canadian government is poised to spend more than half a billion dollars on new anti-submarine torpedoes after the U.S. State Department approved the deal last month.

The torpedoes are to outfit Canada’s air and naval forces stationed on Vancouver Island and Nova Scotia.

Canada approached the U.S. last month to buy 425 of the next-generation MK-54 torpedo conversion kits at an estimated cost of $514 million, according to the U.S. State Department.

At roughly $1.2 million apiece, the kits include enhanced guidance systems and improved counter-countermeasures that will convert Canada’s existing arsenal of Cold War-era MK-46 torpedoes into the modern MK-54 configuration.

While the State Department approved the sale on May 16, the U.S. Congress was granted a 15-day notification period in which it could intervene to block the transfer under the U.S. Arms Control Export Act’s statutes on foreign military sales to NATO countries.

A State Department official tells CTV News the grace period ended without any intervention from Congress at the beginning of June.

According to the U.S. Defense Security Cooperation Agency, the body tasked with promoting U.S. foreign policy through arms sales to friendly nations, the torpedo sale would be a positive move for the U.S. and “will not alter the basic military balance in the region.”

“This proposed sale,” the statement says, “will support the foreign policy and national security objectives of the United States by helping to improve the military capability of Canada, a NATO ally that is an important force for ensuring political stability and economic progress and a contributor to military, peacekeeping and humanitarian operations around the world.”

Raytheon, the co-developer of the MK-54 alongside the U.S. Navy, began producing the lightweight torpedo in 2004.

The Canadian Navy intends to deploy the weapons aboard Halifax-class frigates stationed at CFB Esquimalt and CFB Halifax.

The Air Force would deploy the torpedoes as air-drop weapons from CP-140 Aurora surveillance planes based in Comox, B.C. and Greenwood, N.S., as well as from the new CH-148 Cyclone helicopters based at Shearwater, N.S. and Victoria, B.C.

Under Canada’s Industrial and Technological Benefits Policy, which aims to leverage jobs and economic benefits when foreign defence contracts are awarded, Canada would negotiate an offset agreement with Raytheon before signing off on the $514-million deal.

Procurement Canada did not respond to multiple requests for comment on the purchase.