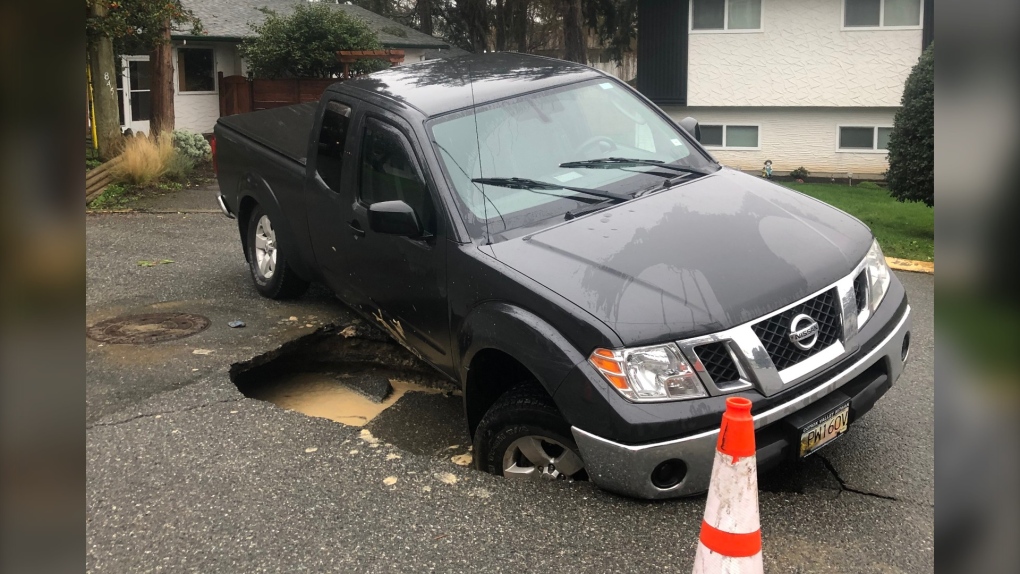 Sue McCartney says that the road collapsed and her vehicle fell into the sinkhole around 9:45 a.m. Tuesday morning: (Submitted)

VICTORIA -- A water main break in Esquimalt has caused a vehicle to fall into a sinkhole and has shut down a residential cul-de-sac Tuesday morning.

The driver of the vehicle, Sue McCartney, says that water had been flooding on Isbister Street since roughly 4 a.m., and that residents of the neighbourhood woke up to crews lining the sides of the road with sandbags.

At approximately 9:45 a.m., McCartney left with her granddaughter, Freya Perfect, to head out for the day. Once the pair had left their driveway, their vehicle quickly sunk into the ground.

"We just turned around down the driveway and we proceeded to head down and we sunk," said McCartney. "I thought a tire might have fallen off and then when I got out I realized it was a sinkhole."

While crews had been on the street since early Tuesday morning, the exact location and cause of the water main break was not yet determined. McCartney joked that pair "helped them find it."

With the sinkhole now uncovered, McCartney was told that a tow truck was unable to come to the area as workers were concerned that the street may be unable to support the weight of a vehicle.

"They didn't get it out right away," said McCartney. "They got some planks and put it into four-wheel drive and they backed it out a bit."

Freya says that when the sinkhole first swallowed up part of the vehicle, she was frightened.

"The scary part was that I was at the window on the side that had fallen in through the hole," she said. "So I didn't really know what happened 'cause it had never happened to me before. So I was really scared – very freaked out."

Once everyone realized they were safe, however, Freya says her fear turned to excitement.

"It was cool seeing them suck the water out because the vacuum was huge." 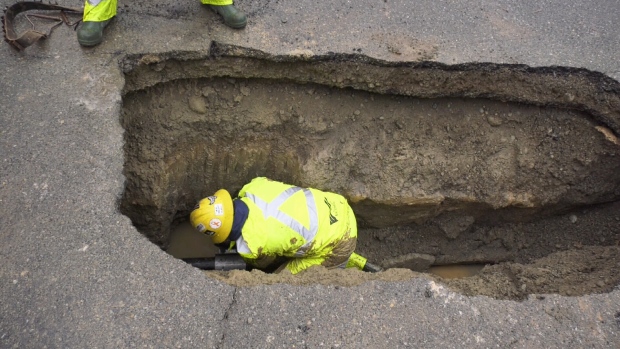 As of early Tuesday afternoon, no vehicles were allowed to enter or leave the cul-de-sac. McCartney says that crews are concerned about the hollowness of the street and are awaiting further assessments.

"Those who have gone to work won’t be able to come back, they’ll have to park somewhere else," she said. "I don’t know how long it will take or what they’re going to do."

Devin, Freya's father, is a plumber and says that he expects the number of water main breaks in the municipality to increase in the future.

He says that heavy rainfall can create ground swelling, which can cause issues for the municipality's aging pipes.

"It's not the first time we've seen something like this in Esquimalt and it won't be the last," he said.

According to the City of Victoria, repairs are underway on the street and work is expected to be completed by the end of the day.