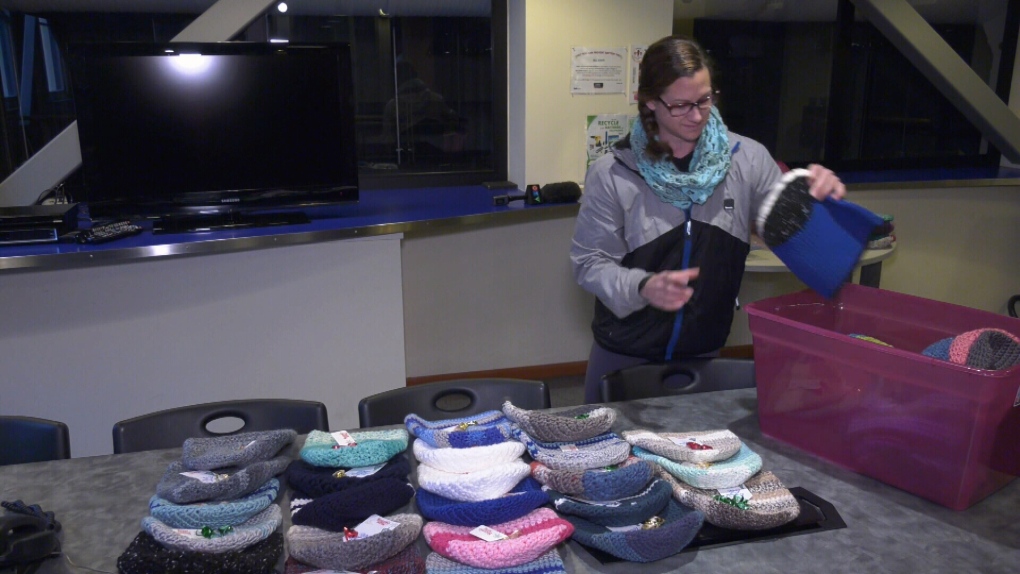 Victoria woman Patrizia Fitch lays out some of her handmade toques that she plans to donate to people in need: Dec. 1, 2019 (CTV News)

VICTORIA – A Victoria woman who's knitted dozens of toques for people in need is asking the community for yarn donations to help with her creations this holiday season.

Patrizia Fitch, who is a crocheting hobbyist, has decided to knit toques for the local community this year. So far, she's handstitched and donated roughly 60 of the head-warmers to people in need, with more on the way.

"So I decided to make these toques and I want to give back because I've received over the years," says Fitch. "So I've donated about 60 to the Mustard Seed ranging from newborn to adult extra-large and I've got another bin that I'm going to donate to Our Place."

"I'm also handing them out as I see people in the cold on the streets at the intersections," adds Fitch. "It's been really cold so I'm just trying to do something nice."

Fitch says that she donated her first shipment of toques to the Mustard Seed as she's used their services before and has seen firsthand the impact that the charity can have on people's lives.

"I've been using the Mustard Seed, yes I've had some hard times," says Fitch. "It's been getting busy there and you always see people so I just thought, 'How can I give back to a place that's given to me?'"

Fitch says that once she dropped off her first delivery of handmade toques, there was an immediate response.

"They were really happy when I dropped off the toques and there was a lady there who actually grabbed one right away and she was really happy and smiling and I thought, 'Wow… how many people can I make smile?'"

Fitch says that she first began crocheting two years ago when she made a series of scarves as a fundraiser for her son, who lives with a neuro-visual disorder. This year, she hopes that her knitting will inspire her children to be generous when they can, especially during the holidays.

"Christmas, it's all about gifts and receiving and not enough about giving, so I want to teach my kids about giving and doing something good for other people," says Fitch.

Anyone who is interested in contributing yarn to Fitch's toque-making campaign can contact her through her email at safenursingworkload@gmail.com.