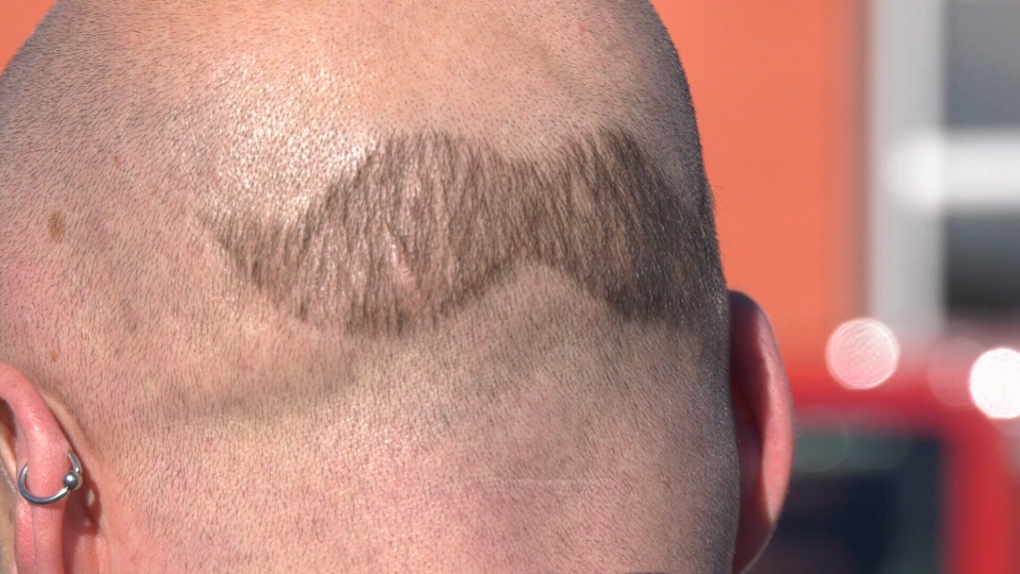 North Saanich firefighter and Movember team captain Eric Keating sports two mustaches, one on his lip and one on the back of his head: Nov. 20, 2019 (CTV News)

North Saanich – They may serve a small community, but the efforts of volunteer firefighters in North Saanich are paying off big when it comes to raising awareness and money for men's health.

Of the 40 active members of the North Saanich volunteer fire department, 25 have signed up to participate in this year's month-long Firefighter Movember Challenge. So far, the participants have raised more than $11,500 for men's health, which places them in the third spot for most money raised across Canada, just behind the second place Edmonton Fire Department and the first place Toronto Fire Services.

"When you've got a population of 2.6 million people in Toronto and you are talking about 12 and half thousand in North Saanich, it is really impressive how the community has come together," said North Saanich firefighter and Movember team captain, Eric Keating.

"Sometimes the small town makes a bigger difference because we are so connected and close."

The fire department is encouraging men across Canada to grow mustaches from Nov. 1 to 30 for the 13th annual Movember Challenge.

The charitable organization, Movember, is committed to changing the face of men’s health and raising awareness for men’s mental and physical health. The charity recognizes that globally, men are dying due to preventable or treatable health issues such as prostate cancer, testicular cancer, mental health and suicide.

"The mental health aspect was a huge one for us because it does affect everybody," said Keating. "With suicide taking 3,900 people in Canada we do believe that mental health is becoming more important."

The volunteer department adds that the hazards found in environments that firefighters are required to be in when fighting fires could expose them to a higher risk of some types of cancer.

They also know that answering the call to serious incidents like car crashes and other traumatic events can increase the chance of a member suffering post-traumatic stress disorder.

"It used to be, 'pull your boot straps up and don’t cry,' but now we are well supported in our department," said Keating. "We always have a debrief after any major incidents and we have access to services and counselling if we need it."

Keating adds that he is challenging Toronto firefighters to stay ahead and for the fourth place Calgary firefighters to catch up, as all of the fundraising is for a good cause.

"At the end of the day, it doesn't matter who wins because if we are all in competition to raise the most amount of money, it is going to be the people who need it most who are the winners," said Keating.