Victoria's plan to cut down tree for bike lanes under fire 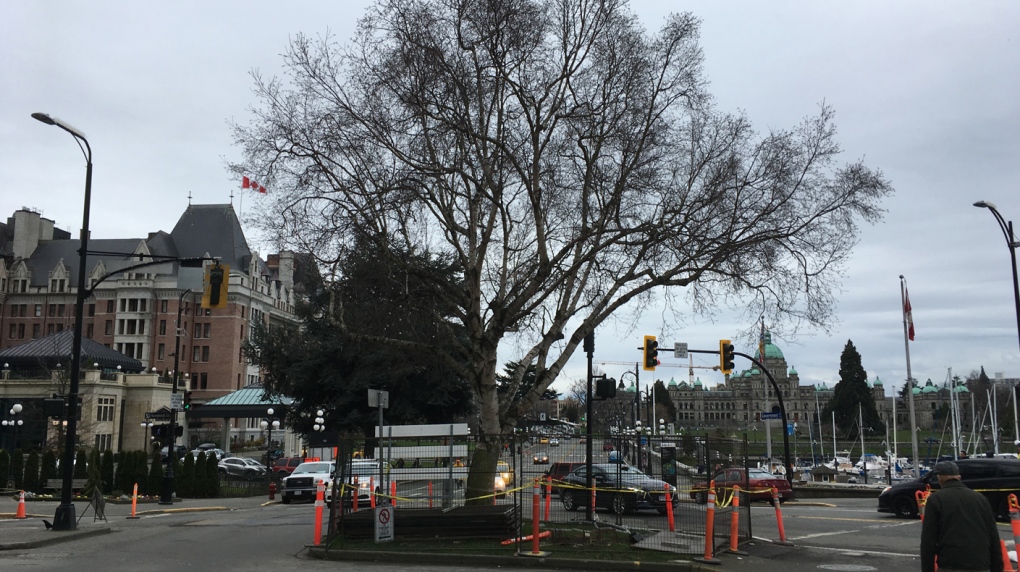 A downtown Victoria tree slated for removal to make way for a 'scramble' crosswalk and bike lanes is shown. Jan. 22, 2019. (CTV Vancouver Island)

A tree at one of Victoria’s busiest intersections will be removed before the end of January, but the plan isn't sitting well with a group of urban forest advocates.

The city says it must remove the tree to accommodate improvements for pedestrians and cyclists at the downtown intersection of Humboldt and Government streets.

But an advocacy group feels the tree is too important to cut down and says the city needs to rethink the removal.

“We see this tree as symbolic of the way we tend to pay lip service to the climate emergency,” says Janet Simpson of The Community Trees Matter Network. “The main problem in losing this tree is the statement that it makes to the world about how we value or don’t value our urban forest.”

The City of Victoria says the tree must come down to accommodate the introduction of bike lanes on Wharf Street and to improve the crosswalk in front of Victoria’s Visitor Information Centre.

“We have gone around it a couple of times and there isn’t anything we can do to save the tree that would allow us to reach our goals,” said Fraser Work, the city's Director of Engineering and Public Works. “We looked at the different options we had and there wasn’t anything we could do in this particular case.”

The intersection is one of the busiest in the city and is considered to be the gateway between the Inner Harbour and downtown.

The city says it must remove the tree to maintain safety for pedestrians, cyclists and motorists.

One of the pedestrian improvements will see the installation of a “scramble” crosswalk that will allow pedestrians to cross from all corners simultaneously.

The tree will likely come down in the next 10 days as the city works with the contractor conducting underground utilities work.

Simpson said she's hopeful those who want the tree to stay put will get in touch with the city.

“The more people who contact city council and say they do not want this tree to be removed, that would send a very powerful message to council, “ she said. “While we are waiting for an update to the tree protection bylaws we need a moratorium on the cutting down of native trees, because in the meantime we are losing hundreds every year.”

When asked for comment about the opposition to the tree removal Work replied, “I think that there are a lot of people worried that the city doesn’t care deeply about trees and that’s not true.”

The city has tried relocating trees in the past but they have not been successful. They will increase the number of trees by planting two oaks, and the city hopes that by planting new trees there will be a net benefit.