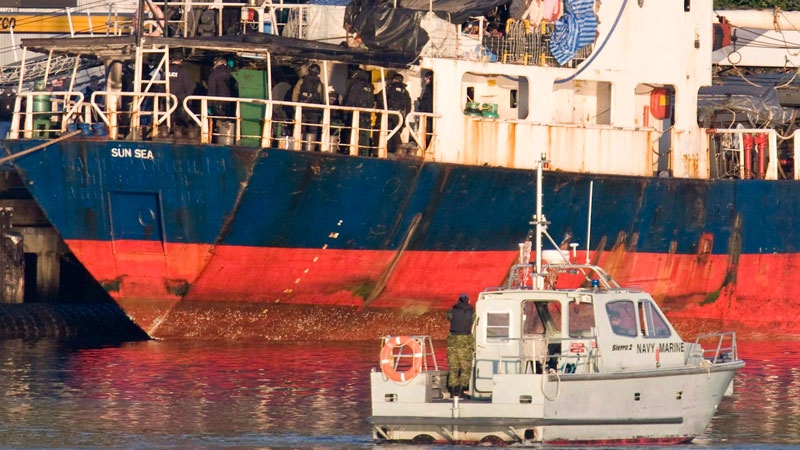 Migrants look over the side of the MV Sun Sea after it was escorted into CFB Esquimalt in Colwood, B.C., Friday, Aug. 13, 2010. THE CANADIAN PRESS/Jonathan Hayward

The federal government is giving a Victoria company more than $4 million to dispose of the MV Sun Sea, the cargo ship that ferried hundreds of Tamil migrants fleeing war in Sri Lanka to Canada in 2010.

The arrival of the Sun Sea with 492 Tamil asylum seekers in August 2010 sparked a national debate over Canada’s refugee policies and began years of high-profile human smuggling hearings that continue today.

Victoria-based Canadian Maritime Engineering Ltd. was awarded the $4.15-million contract on July 12 to dismantle the dilapidated cargo vessel, which has sat moored at a Canadian government dock in Delta, B.C. after spending two years at the Nanaimo Shipyards.

After its arrival, the nearly 60-metre boat became the property of the Canada Border Services Agency, and was found to contain hazardous materials such as asbestos, lead paint, mercury and PCBs.

Earlier this year, the government launched a search for a ship-breaking company to strip and recycle the vessel.

The Sun Sea was deemed safe for towing but only within the waters of southern British Columbia, excluding western Vancouver Island.

Meanwhile, the B.C. Court of Appeal last month ordered a new trial for the only Sri Lankan man found guilty of human smuggling in the Sun Sea case.

Kunarobinson Christhurajah was convicted in B.C. Supreme Court in May 2017 and given a four-year sentence for smuggling the migrants to Canada.

In his appeal, Christhurajah argued the trial judge incorrectly instructed the jury about whether he was acting to help fellow asylum seekers or acting for financial gain.

In a unanimous decision, the three-member appeal court panel said the judge's instructions made conviction a foregone conclusion.

In a separate ruling, the appeal court also dismissed the Crown's appeal of three other men who were acquitted in the Sun Sea incident, saying the prosecution didn't demonstrate that there were errors in the verdicts.

The Sun Sea was the second ship of Sri Lankan asylum seekers to reach B.C. at the time. The Ocean Lady arrived with 76 passengers in October 2009.