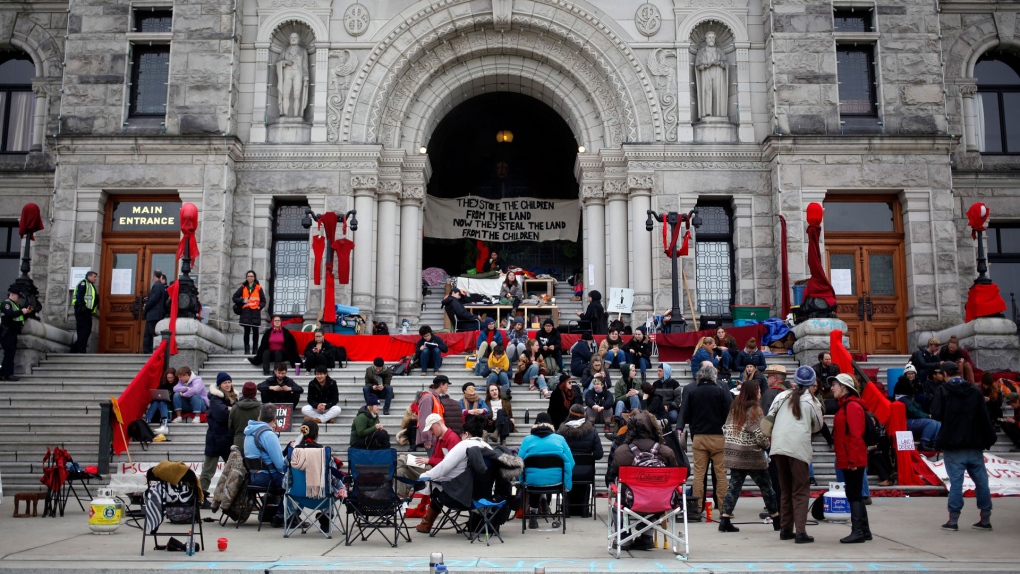 Wet'suwet'en supporters and Coastal GasLink opponents continue to protest outside the B.C. Legislature in Victoria, B.C., on Thursday, February 27, 2020. THE CANADIAN PRESS/Chad Hipolito

VICTORIA -- A mass of students from the University of Victoria (UVic) are expected to hold a walkout Wednesday in support of Wet’suwet’en hereditary chiefs who oppose a pipeline being built through northern B.C.

Organizers of UVic’s walkout say they are planning to walk out of classes on the same day that dozens of other Canadian universities and high schools are also demonstrating.

"Thousands of students from over 32 universities and numerous high schools are set to walk out of classes in solidarity with the demands of the Wet’suwet’en hereditary chiefs," said the group Indigenous Youth for Wet’suwet’en in a statement Tuesday.

"Despite misleading headlines that say an ‘agreement has been reached,' the RCMP are still patrolling on the territory, and Coastal GasLink [pipeline] has resumed construction,” said the group. “The basic demands of the hereditary chiefs have not been met.”

Over the weekend, Wet’suwet’en hereditary chiefs and federal and B.C. cabinet ministers reached a proposed agreement over land and title rights. The issue of the pipeline, however, remains at an impasse.

The Wet’suwet’en are planning to discuss the proposed agreement internally through a traditional feast protocol, which could take up to two weeks to complete.

The details of the agreement have not been made public.

On Monday, Premier John Horgan said that work on the Coastal GasLink pipeline would continue and on Tuesday Prime Minister Justin Trudeau called on the country to exercise patience while negotiations between the government and the Wet’suwet’en were underway.

“We know that centuries of marginalization, of oppressive, broken government policies have created a situation that is untenable,” said Trudeau.

“It is not an easy process. It is a process we are all impatient with that needs to move forward, but we need to remain positive because the only path forward for our country is for all of us to work together and that is what we're going to stay focused on doing.”

UVic students are scheduled to begin their walkout at 10:30 a.m.

Participants will gather at the university before travelling to the B.C. legislature to join the Indigenous Youth for Wet’suwet’en for a statement and rally, scheduled to begin at noon.