UVic students to sleep at B.C. legislature alongside Wet’suwet’en supporters 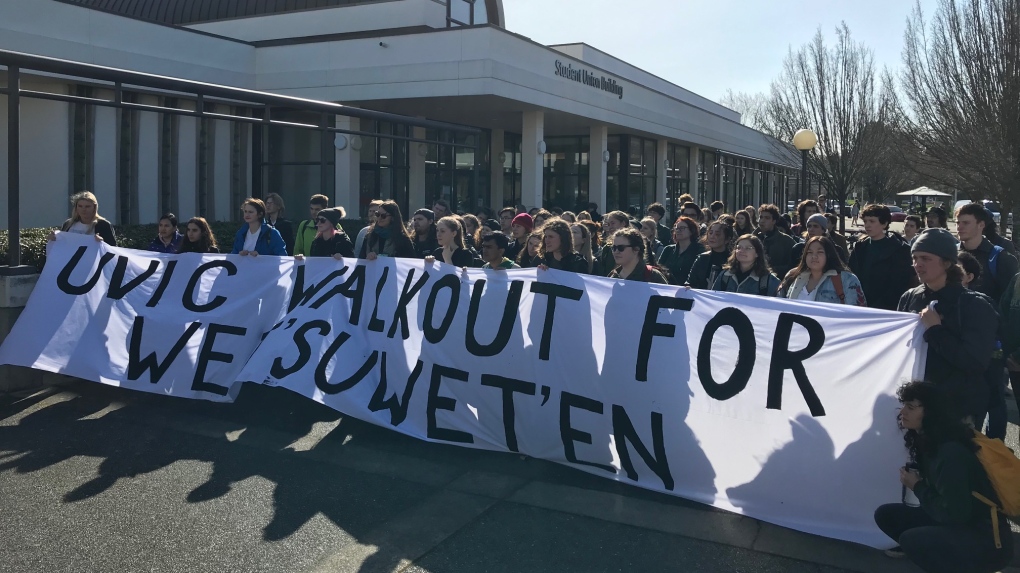 Roughly 100 UVic students walked out of class Wednesday to participate in a rally in support of Wet’suwet’en hereditary chiefs: March 4, 2020 (CTV News)

VICTORIA -- Late Wednesday morning, around 100 University of Victoria (UVic) students walked out of classes to show support for Wet’suwet’en hereditary chiefs who oppose a pipeline being built through their territory in northern B.C.

While Wet’suwet’en hereditary chiefs and federal and B.C. cabinet ministers reached a proposed agreement over land and title rights over the weekend, the issue of the pipeline remained at an impasse.

After gathering outside UVic's student union building for a short rally, students headed to the BC legislature to join with activist group Indigenous Youth for Wet’suwet’en, who have been camping out on the front steps of the building for days.

Walk out organizers say that they are trying to draw awareness to the Wet'suwet'en nation's goals and are hoping to provide safety for the protesters occupying the steps of the legislature.

"I believe we are spreading awareness and all these solidarity movements are happening across the country," said UVic student, rally organizer and Indigenous Youth for Wet'suwet'en member Dakota Nelson.

"We are just going down there to show support and get numbers up there because the more numbers there are, the safer we are." 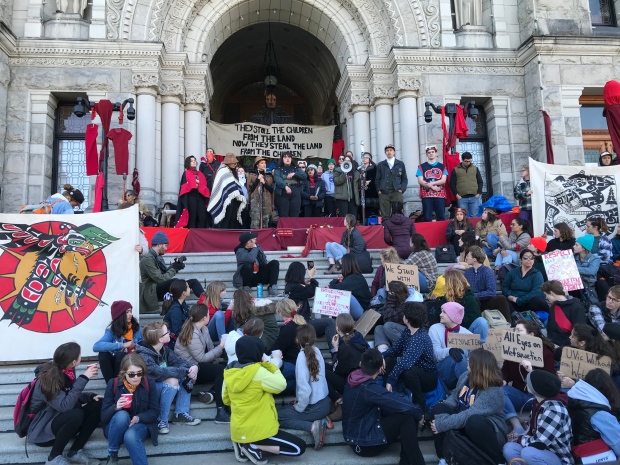 At the legislature, hundreds of students and supporters gathered in peaceful support during the noon hour and into the late afternoon.

The group listened to several Youth for Wet’suwet’en members and then joined in prayer and ceremony.

A number of UVic students are now preparing to sleep on the grounds of the legislature Wednesday night alongside the Indigenous youth who have been occupying the building’s front steps, to show continued support.

UVic's walkout coincided with walkouts at post-secondary institutions across the country Wednesday.

"Until things are mended and talks are happening, I think these solidarity movements are going to keep popping up everywhere until Indigenous sovereignty is recognized and voices are heard," said Nelson.