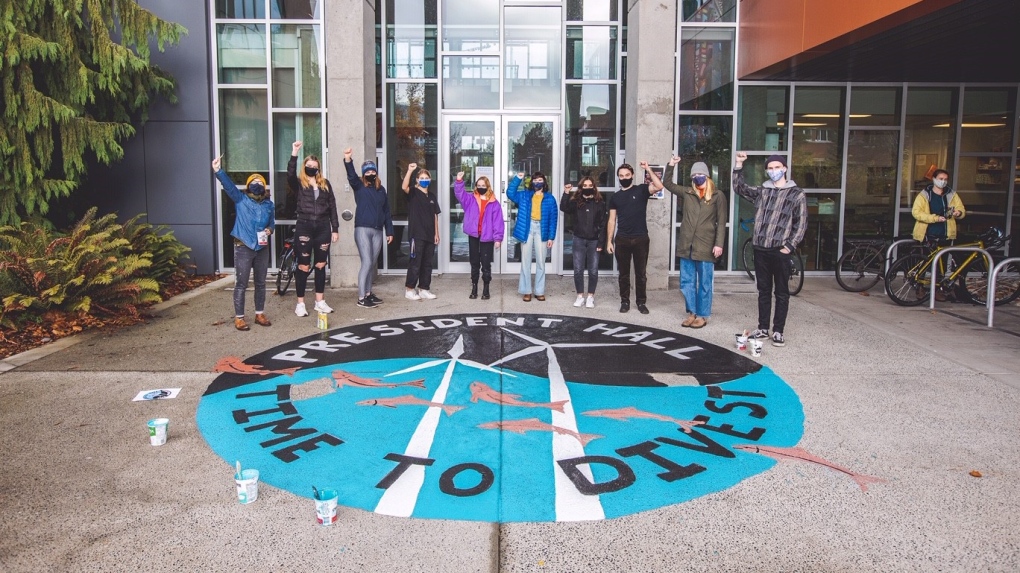 The group created a 14-foot mural in front of UVic’s Michael Williams Administrative Building with the message “President Hall, Time to Divest.”

Students have been calling for the university to divest itself from the fossil fuel industry since 2013, when ‘Divest UVic” was formed.

Emily Lowan, director of campaigns and community relations for the University of Victoria Students' Society (UVSS), says UVic has approximately $400 million worth of investments in the sector, and that needs to change.

“I think the first step is full divestment across all asset classes of fossil fuels by 2025,” Lowan said.

She adds that the university has been dragging it’s heels on the issue and is falling behind other major universities, like UBC.

“Both the UVic Foundation and the UVic Board of Governors’ progress to date has been incredibly slow,” she said. “We need more ambitious climate action immediately.”

Lowan is encouraged that things may change now that the university has a new president.

“President Hall’s arrival on campus is such an exciting opportunity,” she said. “He has demonstrated a strong commitment to both reconciliation with Indigenous people, social issues and a strong climate agenda; and we’re here to hold him accountable to those promises.”

Hall met with the students as they were painting the mural Wednesday, having a casual conversation with several of them.

“He seems very receptive to a strong climate agenda, as well as other social priorities, so we’re really excited to work with somebody that has such a strong understanding and commitment to social and ecological justice,” Lowan said.

The University of Victoria said in a news statement dated Jan. 28, 2020 that it “has adopted a responsible investment policy that targets the worst producers of greenhouse gases across all sectors, increases investments in clean technology and encourages low-carbon practices for a sustainable future.”

Late in the day, after the rally, UVic released the following statement to CTV News on behalf of Hall:

“Our students, as well as our faculty and staff, are passionate about responding to the climate crisis and want to see us doing everything possible to contribute to solutions.

I share that passion. I am interested to hear their views and have upcoming meetings with student leadership to seek their perspectives on what’s important to them.

While I’m new to UVic, I know the institution has world-leading and widely respected research and academic programming related to climate change and environmental stewardship. We also manage our campus operations to high sustainability standards.

I look forward to further discussions with our campus community about how we can do more.”

“The role of direct action like this is to encourage a response from the university,” Lowan said. “It holds them accountable to having further conversations with us more immediately.”

Thursday she will get the chance to make her case to the new president.