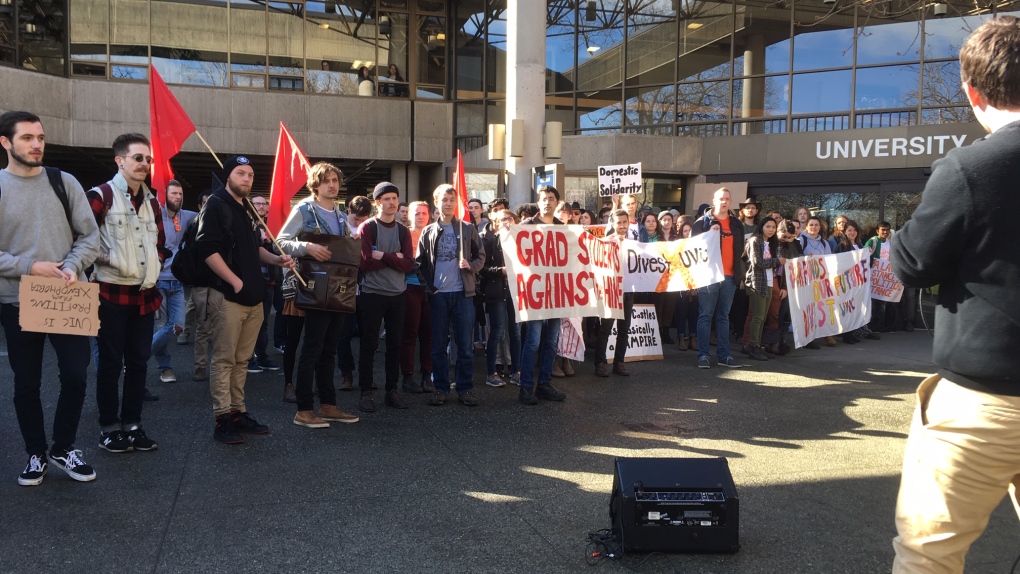 Students disrupted a board of governors meeting at the University Centre to protest tuition hikes to international students. March 26, 2019. (CTV Vancouver Island)

Students at the University of Victoria blocked board members from entering a meeting Tuesday to send a message about tuition hikes.

The protesters wanted the university to do away with proposed tuition hikes of as much as 20 per cent for international students in recent years.

Another group called on the board to divest from fossil fuels, calling it hypocritical to praise environmental efforts on campus while stole holding investment in oil and gas.

The protests forced the board to abandon its open meeting and move to a private gathering.

"I wanted to tell them the effects of their decisions that they make in that room over there," said fourth-year political science student Efe Turker, a board member of the UVic Student's Society. "Whenever they vote on a tuition increase, it directly affects the community that is students. Not just international, not domestic, not Indigenous, but students as a whole."

Turker said students need time to adapt to the tuition increase, which he said was virtually thrust on them "overnight."

While he's not directly affected by the proposed hike, he said many of his friends are already feeling the burden of high tuition and rental costs.

But the board stuck to its original plan after moving into a private meeting, and passed a budget framework that includes tuition increases for international students.

Vice-President of Finance and Operations Gayle Gorrill said the protest was an "important discussion" between students and university officials, but ultimately, the board had to balance affordable tuition with supports for students.

"Also, I think really importantly, it includes information on allocations to support many, many things, that support our students and further the university," said Gorrill.

No decisions were made as to the university divesting from fossil fuels, but Gorrill said there will be "further discussion" with students.

A referendum was held at the university in 2015 where students voted overwhelmingly in favour of divestment.