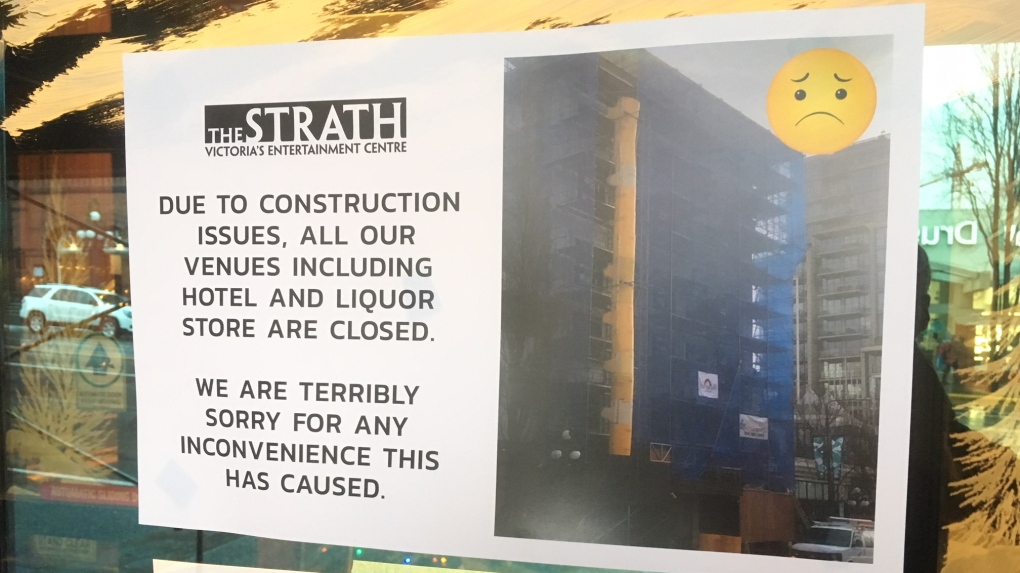 Guests of the hotel told CTV News that the hotel managers had secured new accommodations for everyone: Dec. 12, 2019 (CTV News)

Just 24 hours after the Strathcona Hotel complex unexpectedly closed, the property announced on social media that it would be reopening on Friday at 4 p.m.

On Thursday afternoon the building, which is home to Strathcona Hotel, Sticky Wicket Pub, Distrikt nightclub, Big Bad John's and other businesses, abruptly closed due to "construction issues."

On Friday morning, WorkSafeBC told CTV News that the building had materials which contained signs of asbestos.

Evidence of asbestos in the popular downtown Strathcona Hotel complex in Victoria is the reason why the building and its businesses unexpectedly closed Thursday afternoon, according to WorkSafeBC.

The building, which is home to the Strathcona Hotel, Sticky Wicket Pub, Distrikt nightclub, Big Bad John's and other businesses, was undergoing renovations when signs of asbestos were discovered.

The Worker's Compensation Board told CTV News that the property owners were in the final stages of closing down the building and moving people out Thursday when an inspection officer arrived.

Guests who were leaving the Strathcona Hotel told CTV News that the hotel operator had found other accommodations for all guests to stay.

CTV News was unable to reach the property managers for comment by the time of publication.