People of all ages rally at B.C. legislature in support of Fairy Creek protesters 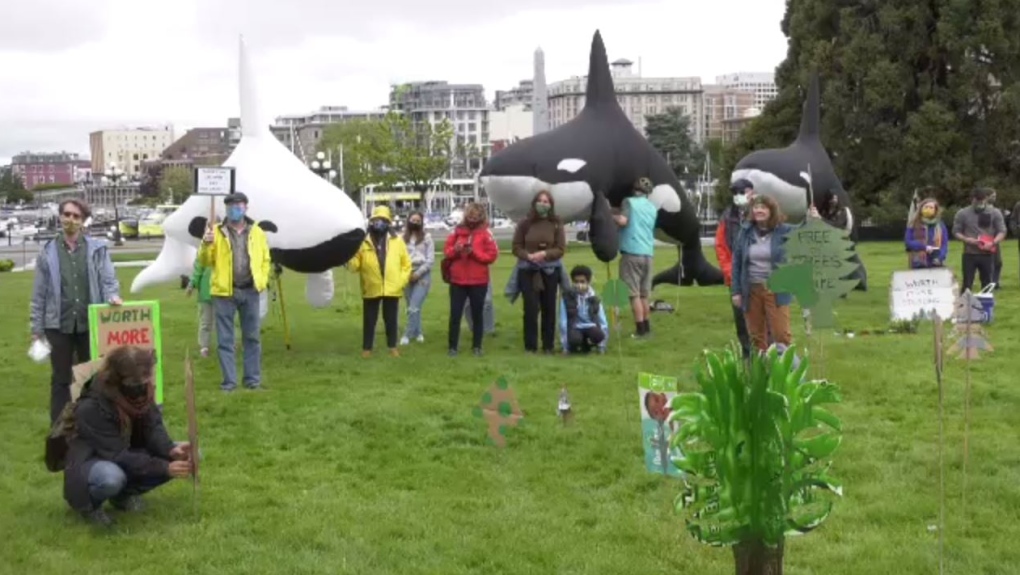 A rally was held on the grounds of the B.C. legislature Monday in support of old-growth logging protesters on southern Vancouver Island: May 24, 2021 (CTV News)

VICTORIA -- Cardboard cut-outs crafted into trees were planted on the lawn of the B.C. legislature Monday in support of activists protecting ancient forests near Port Renfrew.

More than 100 people gathered at the legislature to call for an end to old-growth logging while members of the RCMP continue to enforce an injunction to remove activists from blockades in the Fairy Creek watershed.

"We’re here in support of the people at Fairy Creek, the Rainforest Flying Squad, and all the others on the frontline," said Parents for Climate representative Erin Renwick. "We want to make this more visible and we want our government to pay attention."

Anti-old-growth-logging activists say support from people who can’t be at the blockades is critical in the fight to save ancient forests on Vancouver Island and throughout the province.

"Especially right here on the legislative grounds," said Rainforest Flying Squad spokesperson Saul Arbess. "This is the time, we are the people, it's time to get out there (because) the police are active there and this is the last stand."

Since the summer of 2020, members of the Rainforest Flying Squad have been making a stand to protect a portion of old-growth forest in the Fairy Creek watershed near Port Renfrew.

In April 2021 a supreme court judge granted forestry company Teal Jones and injunction to remove the protesters so the company could begin to harvest logs in the area. The company has said in the past that about 200 hectares of the 1,200-hectare watershed is harvestable, while the rest is either protected or on unstable terrain. It has also said that it plans to harvest about 20 hectares from the harvestable area.

RCMP members from across Vancouver Island and mainland B.C. began enforcement of the injunction on May 18 on a logging road west of Lake Cowichan. Police say they have arrested more than four dozen people who RCMP say were in violation of the court order by refusing to leave an established containment area set up by police.

Meanwhile, at the rally, one father says it was important to bring his family to the event to demonstrate that forests are key to preserving important ecosystems.

"We’re here to protect biodiversity and not the logging companies, it’s a very clear message," said concerned parent Dave Cuddy. "It's very important to come here with our family because we know the trees need our help."

For the people who rallied to demand the end of old-growth logging, the message is clear, ancient forests are not a renewable resource.

"They’re not coming back and this is it," said University of Victoria forest biology student Harley Gordon. "There’s no more hidden, we’re not going to find anymore in valley, 2.7 per cent is all that’s left and the government needs to be held accountable."