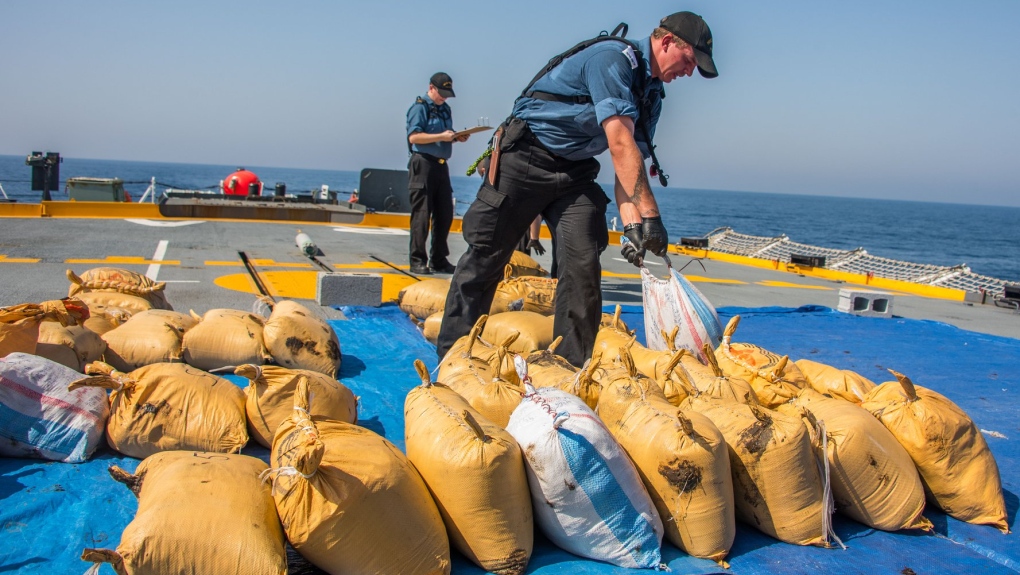 Crew aboard HCMS Regina tally up drugs seized on May 3, 2019. (Department of National Defence)

The Royal Canadian Navy frigate HMCS Regina is celebrating Friday after making its fourth successful drug bust in as many weeks on the Arabian Sea.

The vessel's Vancouver Island-based crew seized 2,054 kilograms of hashish off the coast of Oman on Friday, bringing the vessel's total monthly narcotic haul to more than nine tonnes.

The boarding team and Regina’s crew worked in heat reaching 47 degrees to transfer the hashish onto HMCS Regina where it was destroyed.

On April 6, HMCS Regina seized more than two and a half tonnes of hash off the coast of Oman, and followed it up 10 days later with a three-tonne catch near the border with Yemen.

On April 18, sailors aboard Regina netted one and a half tonnes of hashish and 10.5 kilograms of heroin in the same region.

Cutting off drug-trafficking routes on the Arabian Sea is a priority for the Navy, citing ties between trafficking, international terrorism and organized crime.

"These seizures continue to ensure that the profits made from selling illegally smuggled narcotics are staying out of the pockets of terrorist and criminal organizations, while also protecting the legitimate global trade that Canada and the world depends on," the Canadian Armed Forces said in a statement Friday.

All four seizures were made in the coastal regions of Oman and Yemen, where Regina has been participating in the ongoing Combined Task Force 150 (CTF 150), a sub-group of the 33-nation Combined Maritime Forces naval coalition patrolling Middle Eastern and East African waters.

The vessel left port in February and was joined by the supply ship NRU Asterix, a CH-148 Cyclone helicopter from Comox and a CP-140 Aurora patrol airplane.

Regina is due back in Esquimalt in August.