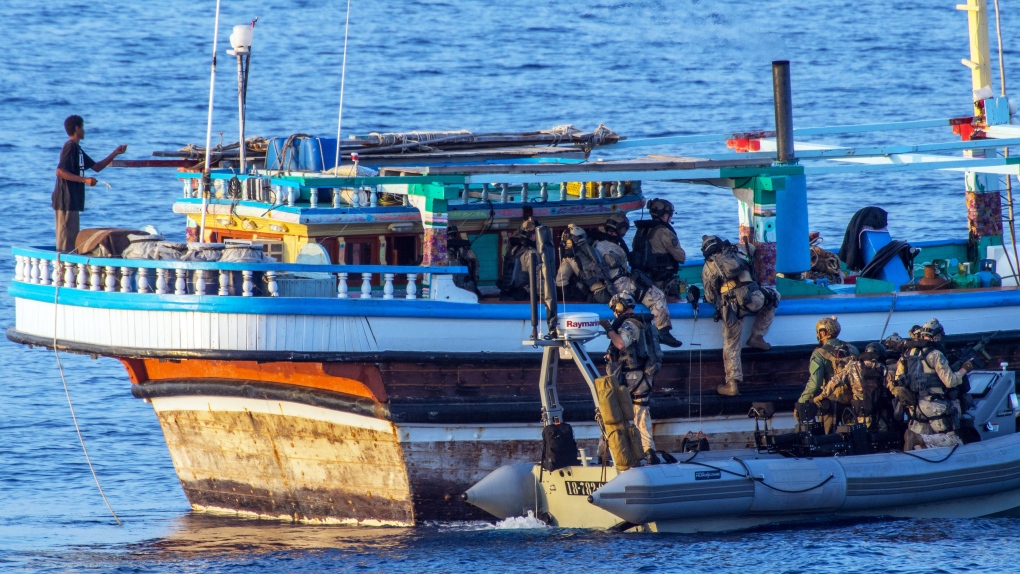 Sailors aboard the Canadian frigate HMCS Regina have made their third significant drug seizure of the month, this time netting one and a half tonnes of hashish and 10.5 kilograms of heroin.

The hash is nothing new for the naval warship, which has been trawling the waters off Yemen and Oman since March, looking for drug traffickers in an area known to sailors as the "hash highway."

But the heroin seizure Thursday, and the way the drugs were concealed, indicates a greater level of sophistication among the traffickers than the Regina has encountered before. It also points to an intersection of the hash highway and the so-called heroin "smack track."

"There's normally not a lot of heroin that is trafficking through the Yemen area," HMCS Regina Cmdr. Jake French told CTV News from aboard the vessel Tuesday. "It's possible that it could have been used for some sampling."

The heroin that moves along the "smack track" is primarily smuggled out of Afghanistan and then over sea to east Africa, where it finds its way to markets in Europe.

Cutting off both the hash and heroin routes out of the Afghan-Pakistan region is a major focus of the Regina on its deployment to the Arabian Sea. The drug routes are used by terrorist groups and criminal gangs to fund their international operations, according to the Department of National Defence.

"It was a little bit of a puzzle for NTOG," French said. "The search took a bit longer, the crew wasn’t very forthright in terms of where anything might have been held. Sometimes they used borescopes and keyholes in order to try to get through and find it."

The drugs were found concealed under access panels hidden by a sheet of metal. They were loaded aboard the Regina and later destroyed.

Whenever a destructive search is done aboard a suspect vessel, the Canadian boarding party does its best to repair any damage done, according to French.

On April 6, HMCS Regina seized more than two and a half tonnes of hash off the coast of Oman, and followed it up 10 days later with a three-tonne haul near the border with Yemen.

HMCS Regina left port in February and was joined by the fuel and supply ship NRU Asterix, a CH-148 Cyclone helicopter and a CP-140 Aurora patrol airplane.

The naval hardware is in the region as part of the larger Combined Task Force 150 (CTF 150), a sub-group of the 33-nation Combined Maritime Forces naval coalition patrolling Middle Eastern and East African waters.

The Regina is due back in Esquimalt in August.