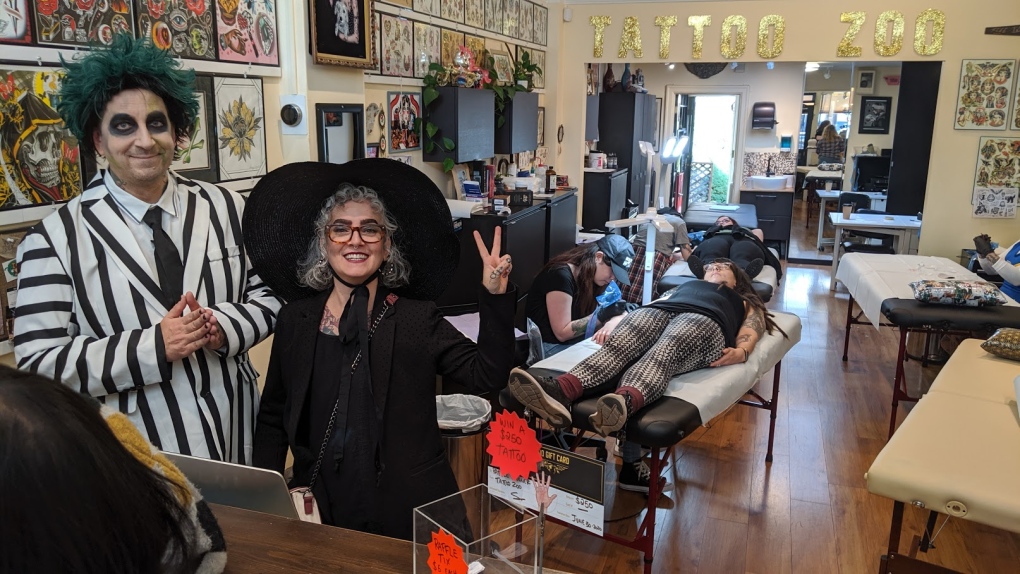 This year all of the funds from the spooky tats are going to support cancer research and the family of Jordie Lunn, a Parksville mountain biker who died after a cycling crash in Mexico earlier this month. (CTV Vancouver Island)

VICTORIA -- It’s become a Halloween tradition for some, while others are there to get their first ink, as Victoria's Tattoo Zoo hosts its sixth annual Halloween flash fundraiser

This year all of the funds from the spooky tats are going to support cancer research and the family of Jordie Lunn, a Parksville mountain biker who died after a cycling crash in Mexico earlier this month.

Tattoo Zoo co-owner Sarah Kramer says Jodie’s brother and fellow tattoo artist Craig Lunn is a close friend of the shop, and wanted to help out his family this year with their crowdfunding.

Dozens of Halloween-themed designs could be chosen, or customers could choose a “get what you get” option, pulling a mystery design from a bowl to ink onto their body.

“We’re usually able to give a couple thousand [dollars] to each charity, and so we’re hoping to beat that,” said Kramer.

People began lining up outside the shop at 8:30 a.m. Thursday. By the time the shop opened at 11 a.m., there were already about 50 people waiting.

Friendships blossomed in the lineup of complete strangers brought together by the spooky tradition.

“We’ve created a whole little group of buddies in the lineup," said one customer. "We’ve went on a coffee run together. It’s like we’ve known each other for ages."

Rhiannon was lined up for the second year in a row, waiting for her turn in line without even seeing the design choices. “It’s a riot every year... it’s a great time for a great cause,” she told CTV News.

“When I came three years ago I was maybe sixth in line," said another customer, Raven. "I got here two hours early this year and there were 16 people ahead of me. It’s bonkers, and amazing.”

Kramer expects the ink will be flowing until about 7 p.m. or until people stop showing up. The shop is also selling raffle tickets for a tattoo gift card to be redeemed later.