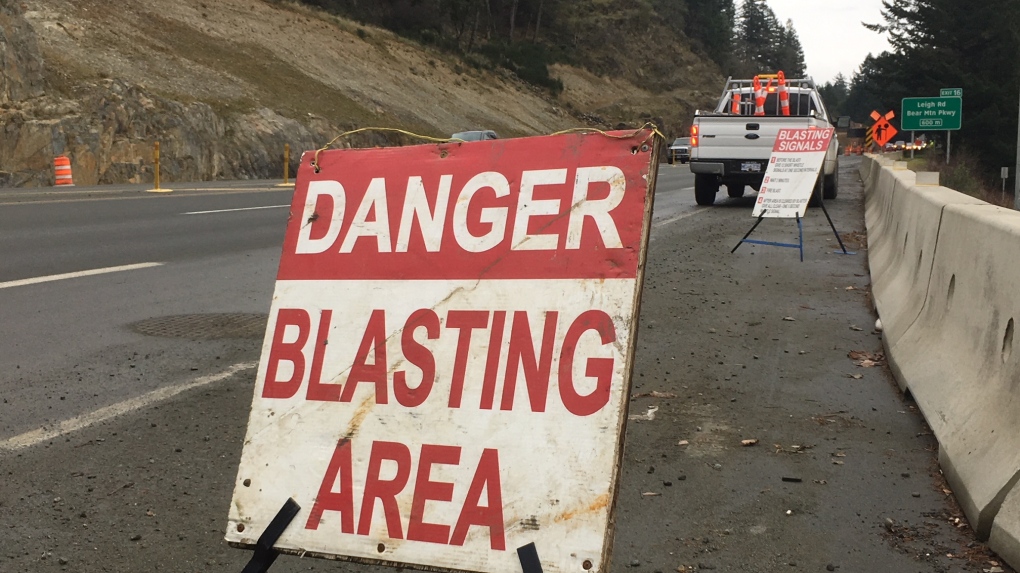 A section of Highway 1 near the entrance of Goldstream Park and the Malahat that will see lane closures until spring 2020: Dec. 3, 2019 (CTV News)

VICTORIA – Drivers who frequently use Highway 1 near the entrance of Goldstream Park and the Malahat should prepare for lane closures and possible stoppages as blasting begins to expand the roadway.

Starting Tuesday, the province's Highway 1 widening project will enter its blasting phase to expand the highway from three lanes to four. Between 9 a.m. and 2:30 p.m. on weekdays, drivers can expect delays of up to 20 minutes for rock blasting in between the Leigh Road interchange and West Shore Parkway.

During this time, commuters should also prepare for single-lane traffic in each direction as northbound vehicles are moved onto one of the southbound lanes to allow crews to work on the northbound shoulder.

The province says that single lane traffic will only be implemented after 9 a.m., after the morning rush hour.

Before single lane traffic is implemented in the mornings, the province says commuters travelling southbound in the area will not see closures between 5:30 a.m. and 9 a.m. Meanwhile, in the afternoons, drivers heading northbound will not be impacted by stoppages from 2:30 p.m. and 6 p.m.

While no construction is scheduled for Friday evenings and through the weekend, the province warns that there may be periods of weekend activity that will require lane closures and stoppages.

The blasting is expected to last until the end of spring 2020, and drivers are being asked to follow the construction zone speed limit of 60 km/h when in the area.

Once the highway widening project is completed, Highway 1 between the Leigh Road interchange and the West Shore Parkway will feature two lanes on each side with a concrete median barrier separating the two directions of traffic.

The entire project is set to cost roughly $9.1-million.