Colin Dowler thought he’d seen everything in the backcountry, but that was before he was knocked off his bicycle and mauled by a grizzly bear.

Speaking to CTV News from his hospital bed at Vancouver General Hospital, Dowler recounted the horrifying struggle in detail.

“I heard the grating,” Dowler said of the bear sinking its teeth into his thigh.

The Quadra Island man was hiking and cycling alone in Ramsay Arm, a remote area 180 kilometres northeast of Powell River, when he was surprised by the bear walking the opposite direction down a logging road.

“I tried to explain to it that 'Hey, we don’t have to have a problem here,'" he said.

But it was far from a peaceful encounter as the grizzly grabbed Dowler by the stomach and dragged him 50 feet toward a ditch, where the struggle became desperate.

“He was mostly chewing on this femur, or this thigh, and I was trying to peel its lips back or its mouth back and it bit me on the arm.”

“I tried that but he just kept chewing so the dead thing wasn’t going to work.”

After several more bites to the arm and feet, Dowler remembered he was carrying a two-inch pocket knife given to him just weeks before by his father.

"I used both hands to pull underneath the bear to get to that knife," he said. "I grabbed the knife out, opened it and stabbed it in the neck and it let go of me immediately and was bleeding quite badly.”

The bear remained metres away from Dowler, and despite its deep wound, kept its attention on the man.

“I wasn’t really sure if it was dying faster than I was or what was going on,” said Dowler.

Using the same knife he stabbed the bear with, he then cut a section of his sleeve to use as a tourniquet for his deeply lacerated thigh.

Dowler crawled back to his bicycle and was eventually able to get himself on it, losing track of the bear in the process.

Somehow he was able to push himself on his bike with his one uninjured leg and travel seven kilometres back to the camp, where he was tended to by workers.

"I had to do quite a bit of pedaling before I was able to glide down," he said. 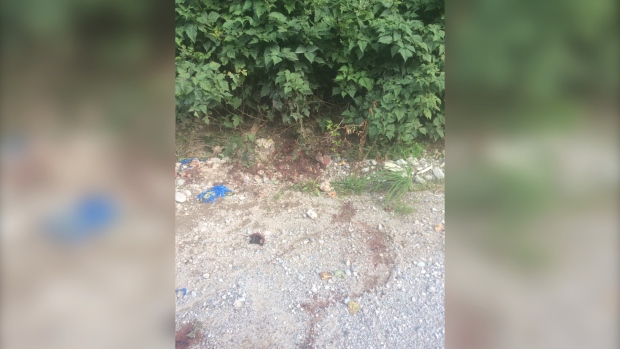 “If you looked at his back where his kidney would be, it looked like a T-bone steak size of flesh was missing and you could see things that a person’s not supposed to be able to see," he told CTV News on Tuesday.

Dowler was transported by helicopter to Vancouver General, where he is recovering from his painful ordeal. Dowler was also in a hospital bed for his 45th birthday on Tuesday, the day after the attack.

From his bedside, Dowler's wife Jenn said she was grateful for the camp crew who provided emergency first aid.

"I just want to thank the guys in the camp because he definitely wouldn't be here if it hadn't been for them, and I'm just happy that my husband is as stubborn as he is," she said. "We're just happy to have him back."

In the days following the attack, the bear was then tracked by four conservation officers.

But hours into their search, the officers found they were the ones being stalked, with the grizzly eventually coming within metres of them.

“It was definitely a little threatening,” said Sgt. Dean Miller of the BC Conservation Officer Service. “It actually probably stalked us for about half an hour while we were thinking we were stalking it – it was just happenstance that one of the officers actually picked up on the bear’s odour from behind us and alerted the second officer who then destroyed the bear.”

They determined the bear was between four and five years old and in healthy condition.

Dowler is expected to make a full recovery from the attack.