'He came back struggling to breathe': B.C. hiker stabs grizzly bear to fend off attack

A hiker in the remote backcountry north of Powell River is in stable condition after he was attacked by a grizzly bear Monday, according to the BC Conservation Officer Service.

Quadra Island man Colin Dowler was hiking and cycling alone in Ramsay Arm, about 180 kilometres northeast of Powell River, when he was surprised by the bear, conservation told CTV News.

"The male was by himself on a logging road when he was attacked by what seemed like a grizzly bear," the BC Conservation Officer Service said in a statement.

Dowler then used a knife that he had on him to stab the bear and fend off the attack.

Badly hurt, he was able to find a work camp where staff began medical treatment. Dowler was rushed to hospital with serious injuries that are non-life threatening. His condition was listed as stable by Tuesday afternoon.

Cook Vittio Ginannandrea told CTV News that the hiker had actually checked in at camp, occupied by a crew building roads in the remote area, the day before the attack.

"Before he left, as a joke I took his picture and said 'We'll put this on the milk carton if you don't come back,'" said Ginannandrea. "Sure enough, a day later he came back struggling to breathe." 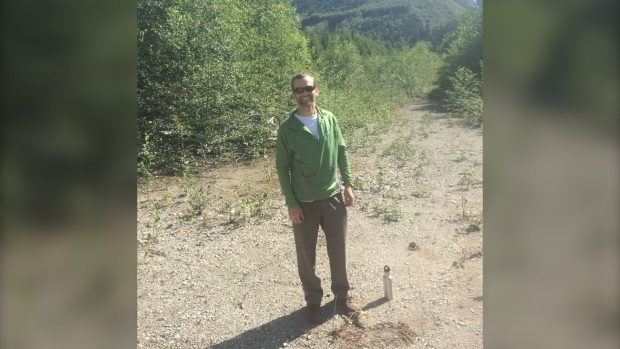 Colin Dowler is shown before he set out to hike Mount Doogie Dowler, named after his relative. (Submitted photo)

He said Dowler was limping his way back on a bike when he stumbled into the camp Monday at around noon.

"We put him on the floor inside and started patching the lacerations and punctures. It was a real team effort," he said. "It was really, really lucky that everybody was here at the time."

Dowler told workers that when he encountered the bear about seven kilometres from camp, he tried to block it with his bike.

"What he told us is the bear threw the bike from his grips and that's when he was fighting it off from the ground and stabbed it," said Ginannandrea.

Dowler suffered deep cuts to his back and was in "tons of pain" as camp members worked on him, he said.

"The best way to describe it is if you looked at his back, around where his kidney would be, it looked like a T-bone steak size of flesh was missing," he said. "You could see things that a person's not supposed to be able to see."

The hiker was given painkillers and received a two-litre blood transfusion before he was airlifted away, Ginannanndrea said.

Dowler's family is now in Vancouver rallying by his side and said the bear may have messed with the wrong person.

"Pound for pound, Colin is one tough wily little bastard, to put it that way," said Matt Griswold, Dowler's cousin. "So if anyone his size and weight were able to do it, he would be the guy."

He said his cousin is an avid outdoorsman and fisherman who loves hiking. He had set out on Sunday to hike Mount Doogie Dowler, named after one of his relatives.

"He's usually really safe and generally knows his stuff," said Griswold. "I could see him in that situation doing what he did to survive."

Conservation officers have been sent to the remote area in hopes of locating the bear and any evidence of why the attack occurred.

There were no witnesses to the attack.