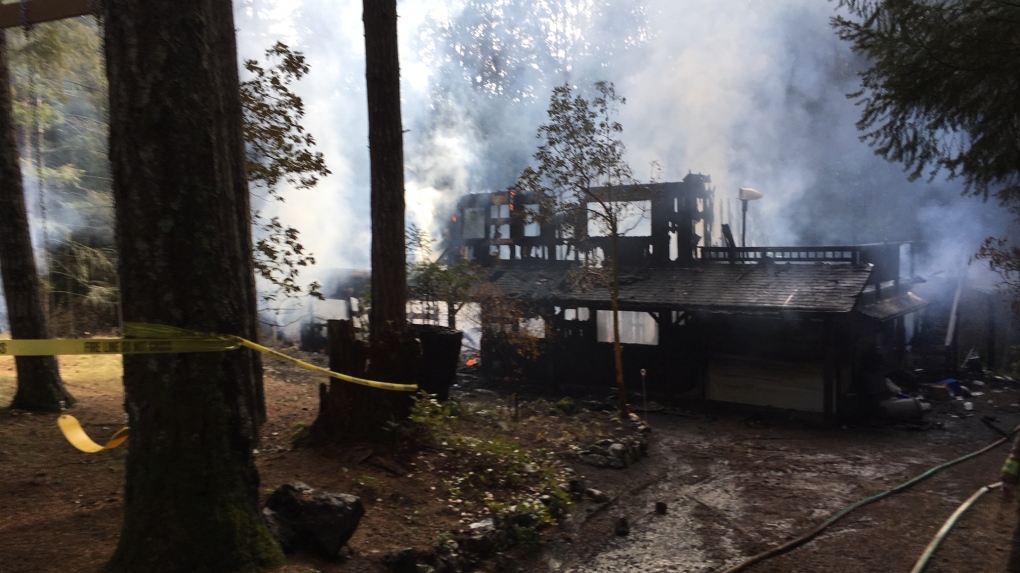 A Victoria-area family of six lost their home and three dogs in a devastating house fire in the Highlands district on Thursday.

Fire investigators will be combing through the rubble searching for the cause of the fire that destroyed the home on Blue Valley Road.

No one was home when fire ripped through the house. Neighbours called 911 after smelling smoke and hearing the crackling of flames just before 2 p.m.

"It was definitely surreal, flames were coming out of the roof at this time and the fire was fully inside the house," said neighbour Aaron Bremner. "Before the fire department got here, the windows started to explode, small propane tanks on the deck started to release and flare up."

When firefighters arrived there were flames coming out of all sides and through both floors of the two-storey home. Fire was coming through the roof, forcing firefighters to take a defensive position to prevent the spread of flames to the adjacent trees.

"It is likely that fire was going for some time before it breached to the exterior and was noticed by the neighbours," said Highlands Assistant Fire Chief Jason Shattinga. "The Office of the Fire Commissioner will likely have an investigator come out and take a look at everything to try to determine a cause."

As there are no fire hydrants in the area, tankers s from three fire departments were used to shuttle water to the scene.

"Our biggest challenge up here is water supply," said Shattinga. "With the tenders shuttling water from a nearby stand pipe we were able to supply water continuously through the effort."

The couple and their four children were not in the home when the fire broke out, but tragically the family's three dogs were trapped. The dogs subsequently died as the house was reduced to ruins by the flames. The remains of the dogs have not yet been recovered.

"Currently the structure is still unsound and there is still weight on the second floor so we have been unable to get in there to verify if the pets are still inside," said Shattinga.

Today neighbours say they are still trying to come to terms with what happened. Their thoughts are of the family, who have only lived in the community for the past year.

"I think everyone can identify with the level of severity of this crisis for them," said Bremner. "People just want to chip in, so we will be accepting donations of clothing, sheets and other necessities."

Bremner and his wife have set up a GoFundMe page to help the family. Bremner says the outpouring of support already is amazing.