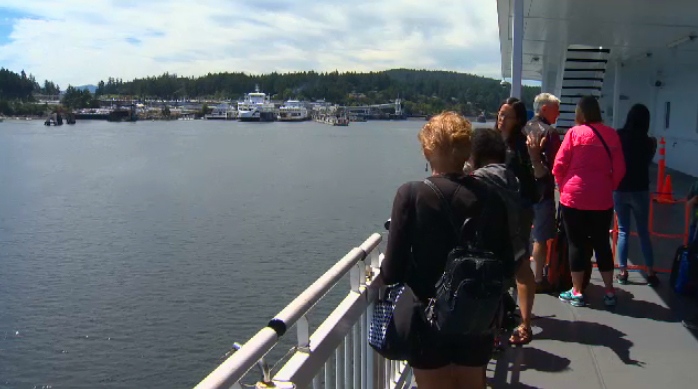 Sailings have been cancelled on Tuesday and Wednesday of this week, with potential updates ahead, says BC Ferries: (CTV News)

VICTORIA -- BC Ferries has issued a travel advisory for this week, warning of reduced sailings between Vancouver Island and the Lower Mainland.

BC Ferries is reducing service by two sailings a day between Swartz Bay and Tsawwassen starting Monday.

On Tuesday and Wednesday, March 17 and 18, BC Ferries will not be operating its noon ferry departing from Swartz Bay and its 2 p.m. sailing departing from Tsawwassen.

BC Ferries says there has been less demand for getting on and off the island, especially compared to previous spring break travel periods.

Upcoming ferry schedules will continue to be adjusted according to demand and advice from provincial health officials, says BC Ferries.

Now, BC Ferries says that customers with reservations on cancelled sailings will be advised by email that their booking has been cancelled and that they will be accommodated on a later sailing, if possible.

Meanwhile, all reservations that are cancelled will have their reservation fees fully refunded.

BC Ferries adds that it has been taking extra sanitation steps as COVID-19 continues to affect the province, including increased cleaning and a reduction in food services.

“Following the guidance of health officials, the Pacific Buffet available on the Spirit of Vancouver Island, the Spirit of British Columbia and the Coastal Celebration has been closed until further notice to mitigate the spread of illness, including COVID-19,” said the corporation in an advisory this week.

Deborah Marshall, executive director for public affairs at BC Ferries, says that the company has focused on cleaning high priority areas.

“You’ll notice at our terminals and on our vessels we certainly stepped up our cleaning routines and sanitation regimes,” she said.

“That’s all the hard surfaces and touch points, things like handrails, buttons on the elevators, cafeteria tables, things like that.”

Marshal is asking people who are travelling on BC Ferries to frequently wash their hands thoroughly, use the hand sanitizers available on the vessels and to try social distancing as much as possible.

BC Ferries is also asking that people refrain from boarding a vessel if they are feeling ill.

Meanwhile, as of Monday, passengers are still not allowed to remain in their vehicles if they are in an enclosed vehicle deck.

BC Ferries, along with other ferry operators across the country, has been in discussions with Transport Canada to see if regulations surrounding people in their vehicles can be relaxed. The company is expecting an answer from the federal agency soon.

Until then, BC Ferries is asking passengers who drive to follow the current regulations.

“BC Ferries is an essential service and will continue to move goods, services and people back and forth between communities,” said Marshal.

Updates on sailings and more information on BC Ferries can be found on the company’s website online here.