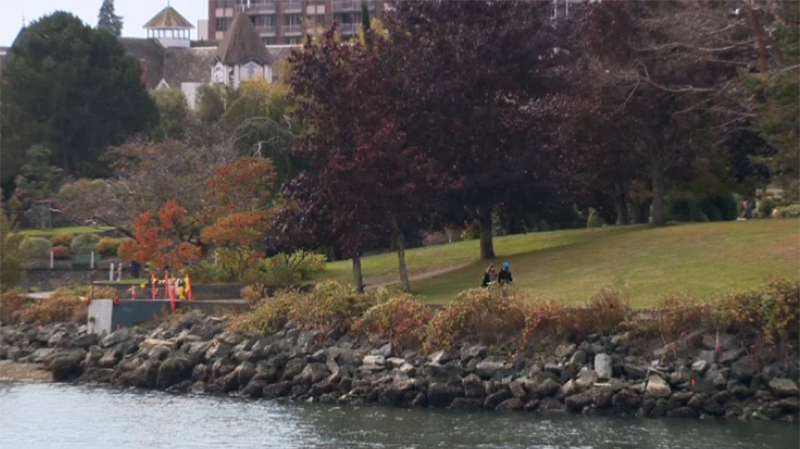 Laurel Point Park was established by Pollen and city council in 1975, after a paint company moved from the location, leaving a wide strip of waterfront available. (CTV Vancouver Island)

The City of Victoria is renaming a downtown waterfront park in honour of a former mayor.

The three-acre Laurel Point Park on the Inner Harbour will soon be known as Peter Pollen Waterfront Park.

The area was recently expanded and remediated with land transferred from the federal government.

Peter Pollen, the park's namesake, had a big hand in making the harbour area accessible to everyone, according to the city.

“A lot of the way Victoria looks and feels today can be attributed to the vision and leadership of Peter Pollen,” said Mayor Lisa Helps in a news release Tuesday.

“I had an opportunity to meet Peter shortly after being elected and was moved by the passion and dedication he still had for public access to the harbour and the importance of public spaces."

Pollen served one term on council and two terms as mayor from 1971 to 1975. He later returned as mayor for two more terms between 1981 and 1985 before retiring.

Pollen, who died in 2017, is likely best known for banning billboards from the city.

“My husband Peter made Victoria his home for over 50 years,” said MaryAnn Pollen in the release.

“He referred to the Inner Harbour as the jewel of Victoria and believed strongly in public access to this beautiful waterfront. Our family is deeply honoured by this dedication in his memory.”

Laurel Point Park was established by Pollen and city council in 1975, after a paint company moved from the location, leaving a wide strip of waterfront available.

The area also has important cultural significance to the Songhees and Esquimalt Nations.

"The city’s reconciliation work aims to make the culture, history, and modern reality of local Indigenous peoples present and apparent throughout the city and valued in our residents' everyday lives," the city said.

Victoria has been working with Lekwungen speakers to learn more about the land and the appropriate name for the park area. At the park dedication ceremony the Lekwungen name for the land will also be incorporated as part of the park signage.

An official park dedication ceremony with Pollen's family will be held on Oct. 26, followed eventually by community consultations on future park designs.