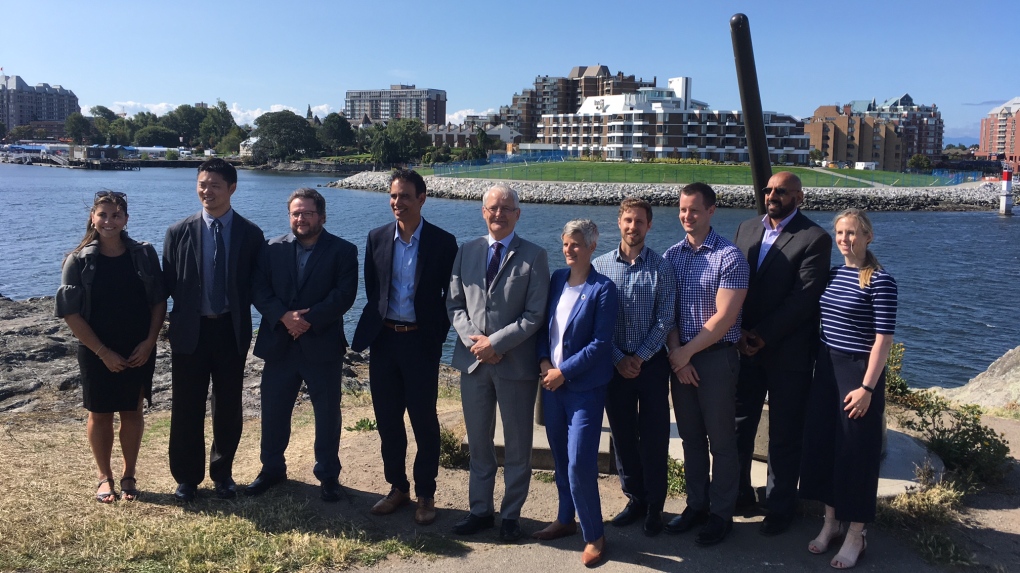 Minister of Transport Marc Garneau announced the completion of the Middle Harbour Remediation Project at a press conference Wednesday at Songhees Point, just across the harbour from the fenced-off Laurel Point site.

Garneau also announced the transfer of two acres of federally owned remediated land to the City of Victoria.

Laurel Point is a prominent feature in the city's Inner Harbour. The three-acre, waterfront park has a lot of potential for public use, says Victoria Mayor Lisa Helps.

It is also essential for the well-being of local marine wildlife, as it is an important feeding ground.

"We have a great partnership with Transport Canada on this project," Helps said. "We’re cleaning up the contamination of the past to create a safer environment for the future. I would like to thank the federal government for transferring their lands to the people of Victoria so we can combine them with ours to create a spectacular new waterfront park."

In a statement the city says the goal of the waterfront park is to "provide health and wellness benefits for citizens."

Laurel Point Park is part of the traditional lands of the Songhees and Esquimalt Nations and was home to a paint factory from 1906 until the early 1970s.

The factory left contaminants in the soil which the city says did not pose a risk to residents and park users but did threaten the environment and marine life. Transport Canada partnered with the city to remediate the contaminated soil.

The remediation project began in October 2018 and finished this summer.

The land transfer agreement between the federal government and the City of Victoria is pending a minimum year-long post-remediation review, which includes environmental sampling of soil and groundwater. The agreement requires that all parties are satisfied with the monitoring results before transferring ownership.

The land where Laurel Point Park is situated is the last major surplus property owned by Transport Canada to be divested in Victoria harbour.

Over the past 23 years, Transport Canada has divested department-owned land around the harbour to the province, local municipalities, the Greater Victoria Harbour Authority, First Nations, regional government, and other federal government departments and private interests.

The area around the Laurel Point Park will remain fenced off until the fall to allow the newly seeded grass to grow and establish itself.

The City of Victoria will announce later a process where people can have their say on the future look and feel of the park.

The concept design phase is anticipated to be completed by February 2020. Following that, council will approve or suggest changes before the project goes on to the detailed design and construction phases.