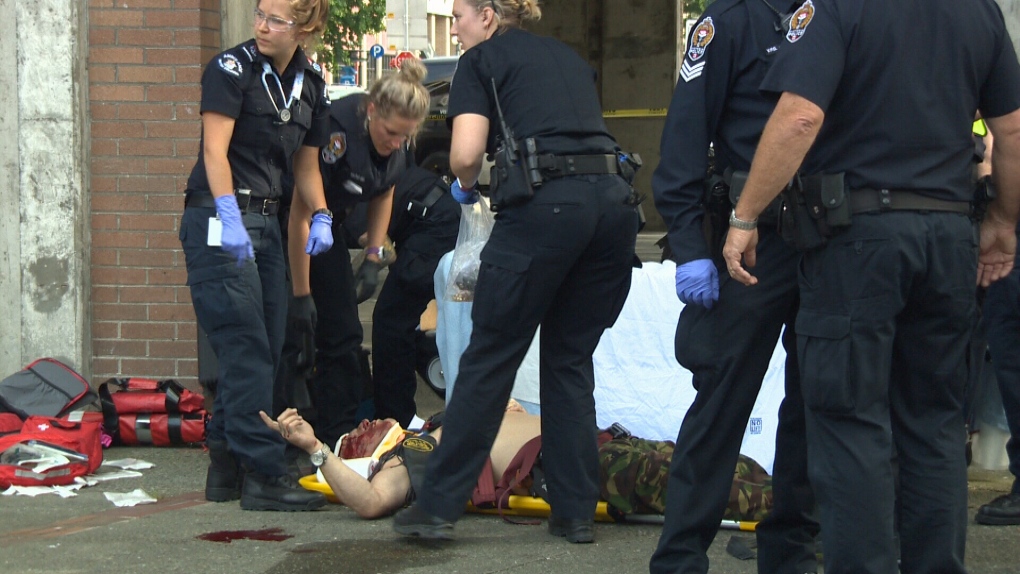 An attack in Victoria’s Centennial Square left one man bleeding profusely from the head on June 30, 2017. (CTV Vancouver Island)

Victoria’s premiere public gathering space next to city hall is also home to an increasing number of visits from police.

Over the last two months, Victoria police have received about three calls for service every day from Victoria’s Centennial Square.

According to data released to CTV News, police received 168 calls for service at Centennial Square in March and April. The two-month stretch marked the highest number of calls for service to the square since 2015.

In March, Victoria police received 85 calls to the public square, an average of 2.7 calls a day. April saw a slight decrease with police receiving 83 calls for service.

Victoria police spokesperson Const. Matt Rutherford says the data may not tell the whole story. He believes police could be spending more time in the square than the numbers suggest.

“I suspect the numbers are actually higher,” he says.

The data only accounts for calls for service and does not take into account undocumented police visits that occur, like when an officer passing by the square stops to investigate a matter without receiving a call.

Rutherford says the calls are often related to youth hanging out in the square.

"We've recognized that it's been a problem area, and it's become a priority for our department," says Rutherford.

Over the last couple of months the department has directed more resources to the square.

Seized these off a youth in Centennial Sq. I don't think there're many bears in the Square. Issued $460 in fines under the CCLA. #yyj #safety #StayInSchoolKids pic.twitter.com/VpleMwWidH

Historically the department has seen an increase in calls in the lead-up to summer. However, this year's numbers for March and April are at a record high.

The city has discussed improving the look and design of Centennial Square for years.

In December 2017, the City of Victoria began the process of improving the square as part of a Centennial Square Action Plan.

The plan calls for more commercial and restaurant space, improvements to the square's connection to Douglas Street, as well as "play elements" that would make the space welcoming for children and families.

The city also hosted a Centennial Square "ideas jam" that saw the creation of several renderings proposing plans for the square.

The plans were scheduled to be presented to the public and stakeholders for further review and input in the fall of 2018 and early 2019.

City council is scheduled to receive a report on its Centennial Square Action Plan within the next couple of months.

In the summer of 2017, as part of a city-held design contest for a "pop-up" play feature, the city decided to install a pod of interactive life-size orcas.

Centennial Square was constructed in the 1960s as part of the 100th anniversary of the City of Victoria. A major renovation to the southwest corner of the plaza was completed in 2009, adding the area known as Spirit Square.