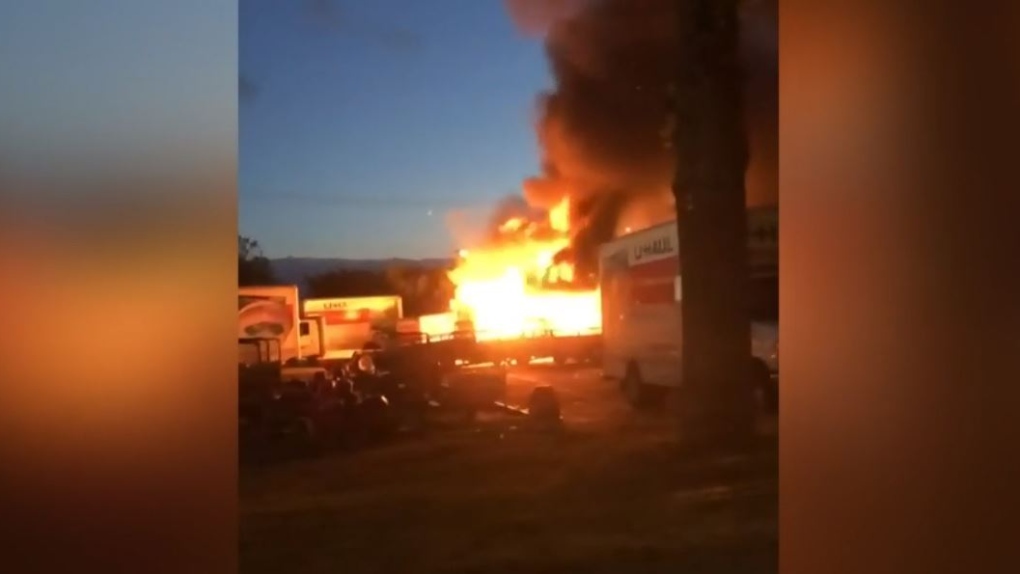 A pair of fires that were allegedly sparked at the U-Haul centre on Nanaimo Street in downtown Victoria are shown: (Submitted)

VICTORIA -- A man has been arrested in connection to suspicious fires that took place in Victoria earlier this summer, one of which caused significant damage to a U-Haul property.

Police say that an arson investigation was launched in June after a suspicious fire was reported at the U-Haul moving and storage facility near downtown Victoria.

Reports of a fire at the U-Haul centre first came in around 10 p.m. on June 7. Before firefighters were able to bring multiple fires on the property under control, flames had damaged two portable storage containers and two vehicles.

“We’re confident that these are intentionally set fires,” said Atkinson on June 8.

Just over a week later, on June 19, police said they were searching for a person of interest related to the fire.

Now, police say that one man has been arrested for the U-Haul fire and for another suspicious incident that involved two fires being lit in a business parking lot in the 600-block of Hillside Avenue on June 7.

The suspect was arrested on Aug. 4 at the former Comfort Inn, located in the 3000-block of Blanshard Street, which has been converted into a temporary homeless shelter amid the COVID-19 pandemic.

He is now being held in VicPD cells and is facing two recommended counts of arson.