VICTORIA -- A Victoria man says he's "uncomfortable" with being called a hero after rescuing a woman from the Gorge Waterway on Wednesday night.

Victoria police were called to the Selkirk Trestle around 9:30 p.m. for a report of a woman in crisis who had gone over the side of the bridge and into the water.

Devin Waugh happened to be walking along the trestle when he says he heard a woman screaming.

"She ran down the trestle a little ways and then ended up jumping over the side into the water," Waugh told CFAX 1070.

Waugh and a cyclist who happened to be passing by ran to the railing and saw the woman clinging to one of the bridge pilings in the water below.

"She was having a crisis. I don't think she knew where she was or what was going on," he said.

Waugh said he got the woman out of the water after about 15 minutes with her. "I would tell her that she wasn’t alone," Waugh said. "That was nice to be able to be there with her"

Police and a Victoria fire department boat arrived shortly after. The woman was taken into custody under the Mental Health Act and brought to a hospital for assessment.

Waugh said his actions to save the woman "didn’t feel that big of a deal the night of" and was a matter of being "in the right place with the right abilities."

"I recognize it’s a story with a good ending and people need more of that right now," he said.

Police say the woman was not injured in the incident.

Despite telling CTV News that he "didn’t feel heroic," Waugh has received call-outs from many members of the community, including B.C. Premier John Horgan. 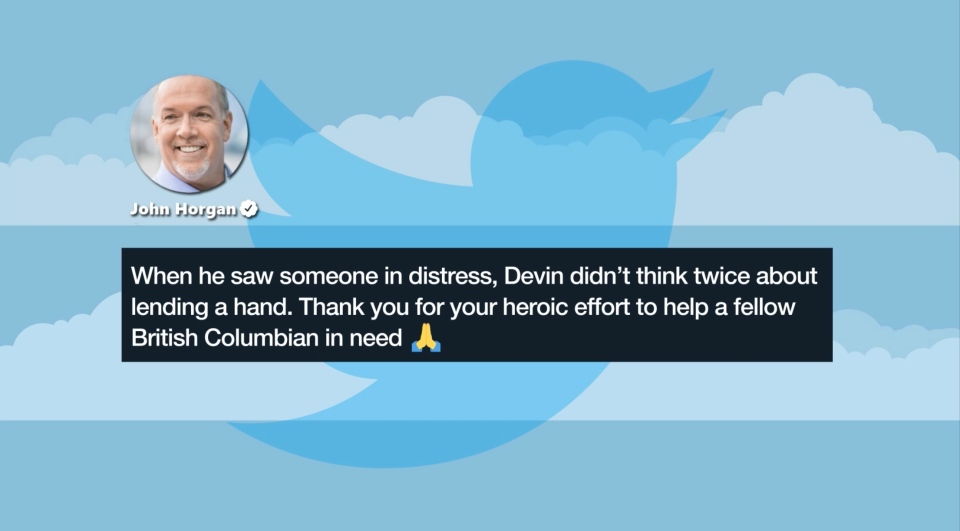 "I just knew I was able to do it, stay safe and also keep her safe," Waugh said.

"I hope she gets the help she needs and she gets well."