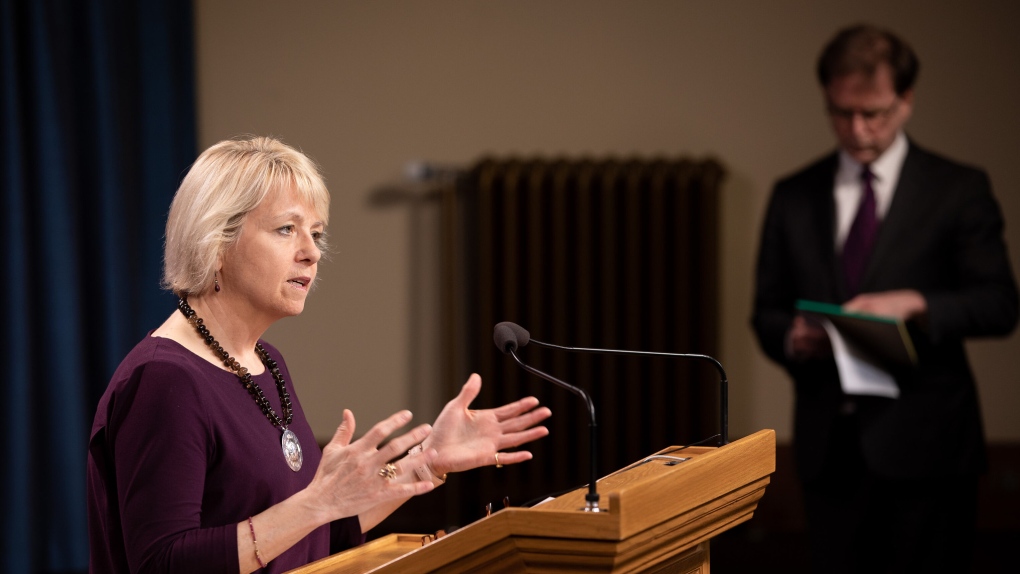 Provincial health officer Dr. Bonnie Henry gives an update on novel coronavirus in B.C. on May 25, 2020. (Province of BC/Flickr)

VICTORIA -- The Vancouver Island region recorded 73 more cases of COVID-19 and one more death over the weekend.

The island cases were among 1,344 new cases found across B.C. since Friday.

Twenty-six people died of the virus over the weekend, bringing the provincial COVID-19 death toll to 1,154. Eighteen people in the island region have died of COVID-19 since the pandemic began.

“Our hearts and thoughts go out to all who have lost people this weekend,” said Henry. “This is a very challenging time.”

The Island Health region has now recorded a total of 1,471 cases of COVID-19 since the pandemic began, including 1,222 people who have fully recovered.

There are currently 219 active cases in the Island Health region, including 16 people in hospital and five people in critical care.

Island Health officials have identified the approximate locations of 211 active cases Monday. They include 25 active cases on the South Island, 18 on the North Island and 168 on the Central Island.

Over the weekend, a COVID-19 outbreak was declared at Nanaimo Regional General Hospital. It’s the second outbreak the hospital has declared since the pandemic began.

“This weekend, unfortunately, we received additional information about holdups to the supply of the Pfizer vaccine that we were expecting to receive in the next few weeks,” B.C.’s top doctor said. “This next two weeks we’re going to have very little vaccine. As we knew, we are receiving no Pfizer vaccine this week and it is also a week where we do not receive any new vaccines from Moderna.”

Henry said the amount of vaccine the province was expecting in the first week of February has been “dramatically reduced” and it’s unclear how much – if any – B.C. will get over the following two weeks.

The reduction has led the health ministry to rethink its newly announced immunization plan for the province.

“We know that the federal government is doing everything in their power to make sure that our vaccine supply gets back on track as soon as possible,” Henry said. “Because of this extremely limited supply over the next two weeks, we have made the decision that we will be delaying second doses up until day 42 for this short period of time.”

Henry said health officials will make up for the shortfall and second doses will be administered “as soon as we possibly can.”

As of Monday, the health ministry has administered 119,850 doses of vaccine, including 3,193 secondary doses. The province has received a total of 144,500 doses from both vaccine suppliers.

Most of those vaccines have gone to long-term care homes, where approximately 33,023 staff members and 25,701 residents have been immunized. An estimated 4,050 staff and 7,147 residents at assisted-living facilities have also been vaccinated.

Henry called on all British Columbians to renew their commitment to bending the curve of COVID-19 transmission over the next two weeks, saying new cases in the province have plateaued at roughly 500 new cases per day.

“I’m asking you now, as much as possible – more than you’ve ever done before – to stay home, to stop those social interactions, to focus on the key things that are keeping us together,” she said.

“This is the most challenging of times for us,” she said. “It’s not the time to falter.”

B.C.’s health minister reiterated how crucial the next two weeks are to hold the line on preventing spread of COVID-19 while the province awaits more vaccines.

“We’ve been given the guidance to keep us safe and this is the moment to follow it,” Dix said. “We’ve been 100 per cent committed to our fight but our fight is far from over.”

225 million jobs were lost worldwide in 2020 thanks to the pandemic, report finds

U.S. COVID-19 numbers drop, as the race against new strains heats up

Filipina front-line workers are turning their pandemic struggles into art

'It wasn't called COVID at the time': One year since Canada's first COVID-19 case

Trump's virus adviser says some saw it as 'hoax'

Too soon to know if Canada's COVID-19 case decline will continue, Tam says

'Check it twice': Daughter baffled after her mother receives Moderna and Pfizer vaccines

The megarich have already recovered from the pandemic. It may take the poor a decade: Oxfam