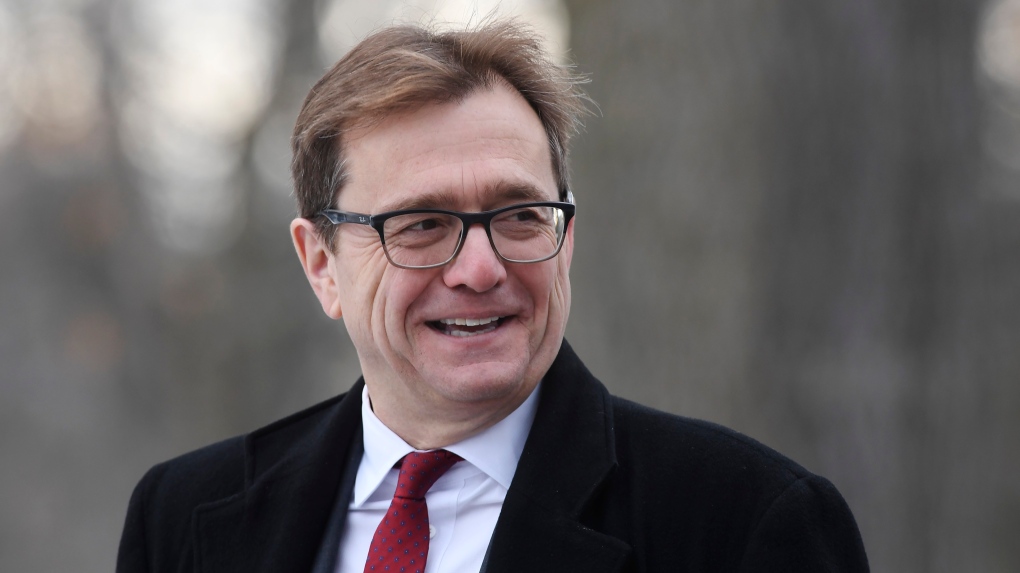 OTTAWA - Jonathan Wilkinson has been the minister of environment and climate change for less than 24 hours but the job is likely going to get harder from here.

“Environment is probably the most challenging portfolio in government the next three years,” said Stewart Elgie, a law professor at the University of Ottawa's Institute of the Environment.

Wilkinson's new job in the environment portfolio comes with a more prominent profile after an election where climate change was a top-of-mind issue for voters but also laid bare some of the deepest political divides Canada has ever faced.

The task ahead involves rapidly ramping up Canada's ambition to cut emissions and transition the economy away from fossil fuels without letting the energy-based economies of Alberta and Saskatchewan collapse.

Speaking to reporters following the swearing-in ceremony Wednesday, Wilkinson was mindful of the balance between climate action and “legitimate economic concerns” of oil and gas provinces.

“We have started the process of trying to think through the economics of how we move through this energy transition but obviously we need to do more,” he said at Rideau Hall.

Wilkinson himself cited his background as a clean tech company executive, as well as his Saskatchewan roots, as being instrumental to his thinking on the file. He was raised in he was raised in Saskatoon, graduated from the University of Saskatchewan and worked as a constitutional negotiator, economic adviser and intergovernmental affairs officer in the NDP government of Premier Roy Romanow.

He said clean technologies will be among the key solutions to Canada's climate and economic problems.

Among Wilkinson's first orders of business will be setting five-year targets for cutting emissions and introducing legislation to hold Canada's accountable for meeting them. He has to develop a “just transition” law to ensure Canada limits the harm that will be felt by workers in communities largely dependent on oil and gas for jobs and economic growth.

He also, Elgie notes, has to implement Canada's heightened targets to protect almost twice as much as land by 2030, and ban most single-use plastics within the next two years.

Louie Porta, the executive director of the non-profit Arctic conservation organization Oceans North, worked with Wilkinson frequently over the last four years on conservation files and called his appointment an “important, thoughtful selection.”

“It's no secret that the environment and action on climate is a priority for this government and it's no secret that society is not unified on the type of action we need to take,” he said. “He has the right disposition to find those solutions. I think he understands the frustration of the West and I think he will earnestly do his best in the position he has been given.”

Some activists had hoped longtime rookie Liberal MP Steven Guilbeault, a longtime Quebec environment leader, would get the job.

The Montreal MP was named minister of heritage in the Wednesday shuffle.

Trudeau dismissed those concerns, saying he wants environment expertise throughout his cabinet and said as many as six ministers will have climate action and the environment among their specific mandates.

Catherine Abreu, the executive director of Climate Action Network Canada, said it is great that there will be deep knowledge of the environment in many cabinet roles, including Catherine McKenna, who was named infrastructure minister after spending four, tumultuous years in environment.

Elgie said McKenna will eventually be seen as one of the most effective environment ministers Canada has ever had, having put in place a laudable climate action plan and a national carbon price. But he said Wilkinson may bring a different communications style to the role.

McKenna was an avid user of social media, which led to her being attacked relentlessly online and in more recent months, verbally assaulted in person.

On Wednesday, McKenna dismissed the suggestion she had asked Trudeau for the change.

“I'm not going to stop doing what I believe is incredibly important because of the hate I receive and many women receive,” McKenna said, adding that the infrastructure portfolio, including through investments in public transit, is another way to champion the cause.

Wilkinson has shown an inclination to work across party lines, stepping in last spring to rescue a Conservative senator's bill to bar importing shark fins when it became clear it wasn't going to pass before the parliamentary session ended.

Sen. Michael MacDonald said Wednesday he was pleased to see the bipartisan effort Wilkinson made to take the shark fin bill and incorporate it into his government bill overhauling the Fisheries Act, which meant the shark fin ban became law last summer rather than dying off with the 42nd Parliament.

“I have nothing negative to say about this minister,” MacDonald said of him.

This report by The Canadian Press was first published on Nov. 20, 2019.