VICTORIA -- Forestry company Teal-Jones is speaking out on the dispute between the company and activists who are protesting old-growth logging near Port Renfrew.

Fairy Creek sits within tree farm licence 46, which was established back in 1955. With Teal-Jones planning to begin logging in the valley, protesters have setup blockades in the area.

“Over 70 per cent of the province's old-growth is protected,” said Jack Gardner, log broker and custom cutter with Teal-Jones. “You know, we believe in a balanced approach to a working forest.”

The company says it only has access to a small portion of the Fairy Creek old-growth forest area, and of that total, it currently only plans to log a fraction of it.

Of the 200 hectares available for logging, Teal-Jones says it currently only plans to harvest 20 hectares. 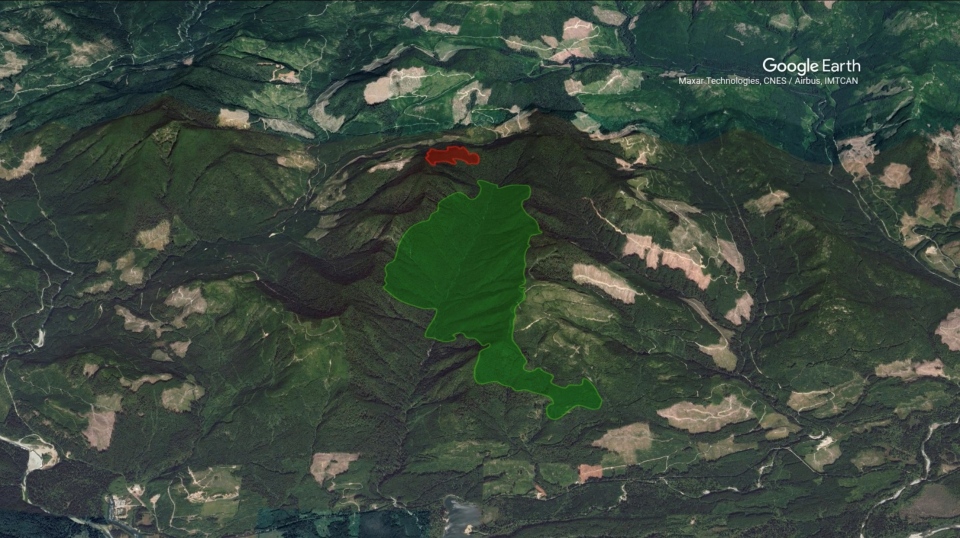 Areas of the valley that are protected in perpetuity are highlighted here in green in a map provided by Teal-Jones. The planned logging area is highlighted in red. The province did confirm to CTV News Wednesday that it is consistent with the government's sources for protected areas.

The 20-hectare cut-block that is currently planned for logging sits on the upper north ridge of the valley. Another 180 hectares is available for harvest, which also lies along that north ridge. Teal-Jones says it currently has no plans to log those areas at this time.

Activists, however, say's it's unacceptable to log even a relatively small portion of the region.

“Beyond that, we shouldn’t be logging old-growth forests period,” he said.

So why harvest old growth trees in the first place?

Teal-Jones says it's because the wood is easier to work with for high-value products.

The tighter the grain the better, and old-growth timber provides that tighter grain, meaning it won’t crack when it is dried out to make specialty products.

“We produce a wide range of products,” said Gardner. “Dimensional lumber, decking, fencing, timbers and even guitar tops. These types of trees are important for products that we do rely on.”

Meanwhile, other members of the forestry industry are quick to point out that logging plays a large role in B.C.'s economy.

“Forestry is a huge contributor to our economy,” said Carl Sweet, director with the BC Forestry Alliance.

“Teal-Jones does not export any logs,” added Gardner. “So anything we harvest there will be processed here in B.C.”

Protesters, however, say the ends don't justify the means.

“Those quality wood products (come from) deforestation,” said Wright. “They’ll say they're going to replant and the trees will grow back, but you can’t grow back a 1,000-year-old tree.”

Activists have vowed to hold their ground in the Fairy Creek Valley, to protect those old-growth trees. On Tuesday, protesters were served an injunction to remove their blockades, allowing RCMP to potentially make arrests if they do not leave.