Shaw customers notified of data breach that happened back in June 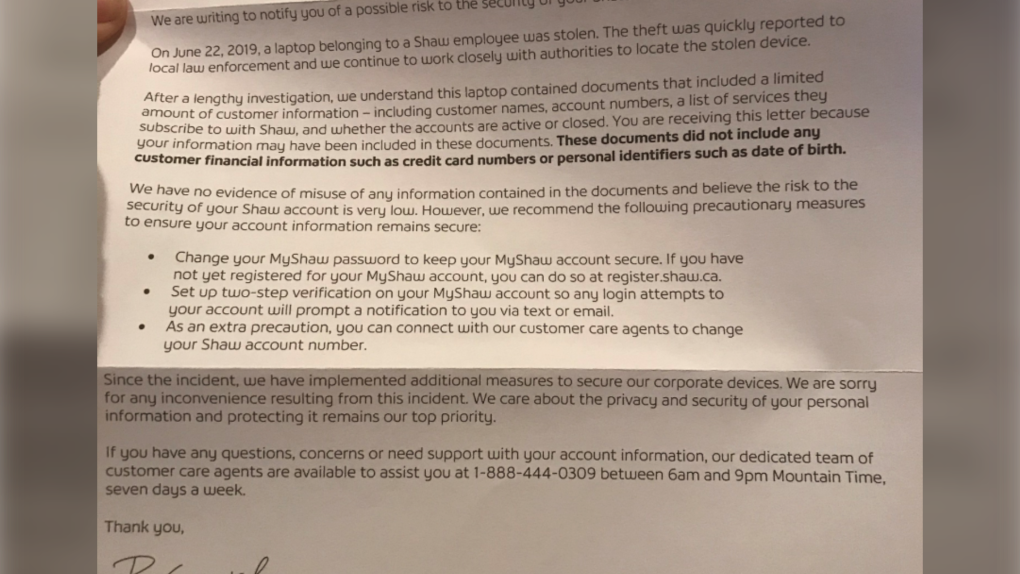 Shaw customers have been notified by mail about a security risk after a company laptop containing some people's personal information was stolen months ago.

VICTORIA -- Shaw customers have been notified by mail about a security risk after a company laptop containing some people's personal information was stolen months ago.

In a letter to customers, Shaw Communications Inc. said the computer belonging to a Shaw employee was stolen on June 22.

“After a lengthy investigation, we understand this laptop contained documents that included a limited amount of customer information,” said Baveldeep Grewal in the letter.

A Courtenay resident who received the letter asked not to be identified and said the mail arrived at their home on Friday.

Customer information – including names, account numbers, a list of services they subscribe to and if their accounts are closed – is listed in the letter as information that is at risk.

Chethan Lakshman of Shaw Communications Inc. tells CTV News Vancouver Island the letter was only sent to a small number of customers affected by the incident.

“The impact of the incident was not specific to any particular region,” said Lakshman. “These documents did not include any customer financial information or personal identifiers.”

“The scope of our investigation was complex and took several months to conclude,” said Lakshman. "We have no evidence of misuse of any information contained in the documents on the laptop, and believe the risk to our customers is very low.”

The laptop has not been found by police, according to Lakshman.