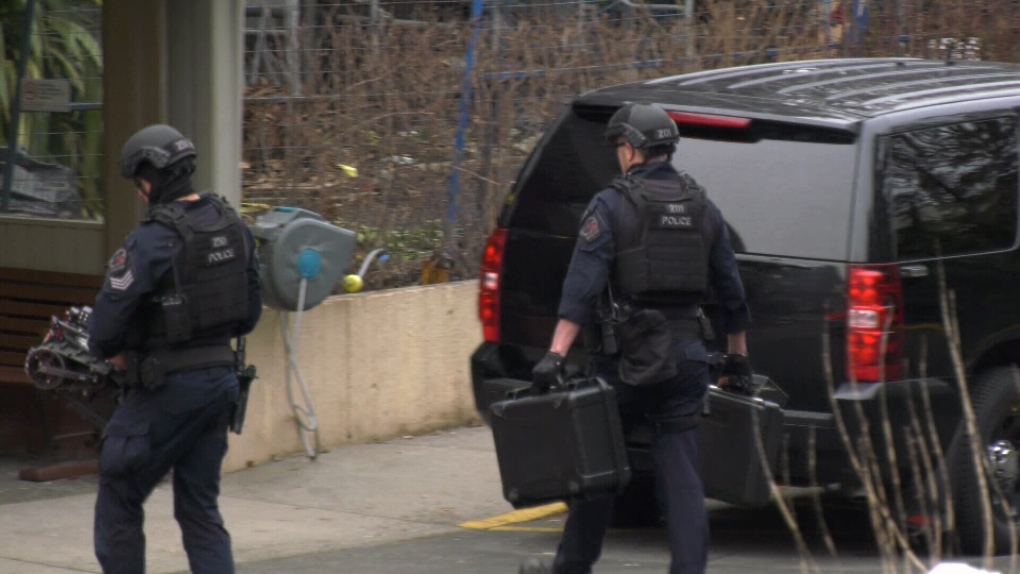 Police officers swarmed a building in the 800-block of Vernon Avenue and cordoned off the area around 7 a.m. Friday, Feb. 22, 2019 (CTV Vancouver Island)

Police concluded no one had a weapon in a Saanich apartment building Friday following reports from tenants.

Officers swarmed a building in the 800-block of Vernon Avenue and cordoned off the area around 7 a.m.

The caller told police they heard a man in the hallway talking about someone with a firearm, which prompted the fire alarm being pulled.

Due to the nature of the call, the Greater Victoria Emergency Response Team and K9 team as well as Saanich firefighters were called in to help.

The building was evacuated and locked down while officers did an extensive search. ERT members were seen on a rooftop.

"We always put public safety first and when we don't know what we have and it's a report of a weapons call we're going to bring all the resources we have available … it's all for precaution," said Sgt. Julie Fast, Saanich Police Public Information Officer.

Police say they found no weapon and are satisfied with their investigation.

A man was located and taken to hospital for a mental health assessment. No charges have been laid and no one was injured in the incident.

Residents were allowed back in the building and all lanes on Vernon Avenue reopened around noon.