VICTORIA -- The Royal BC Museum is studying a prehistoric sea turtle fossil that was found on Vancouver Island earlier this year.

Researchers are excited about the discovery because the unidentified fossil may be a new species of sea turtle that has not yet been studied, according to the RBCM.

Alternatively, the fossil may be just one of two known species of ancient sea turtle whose fossils have been found in the area, near Courtenay, says the museum.

"Either way, this discovery is a win for palaeontology in B.C.," said RBCM palaeontology collections manager Derek Larson in a release Tuesday.

"If the fossil is a known species, we’ll learn a lot of new information about that species because these specimens are rare and, so far, incomplete." He said. "If the fossil turns out to be a species that is new to science, that could exponentially advance our understanding of marine ecosystems millions of years ago.”

The roughly 84-million-year-old fossil was located in the Puntledge River area in January 2021 by fossil hunter Russell Ball. 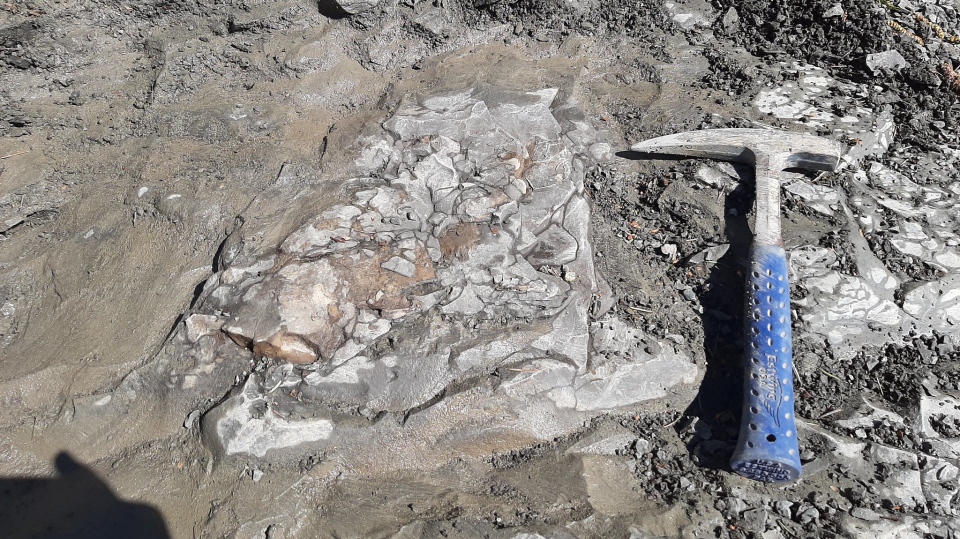 The approximately 84-million-year-old sea turtle fossil is shown embedded in the banks of the Puntledge River: (Royal BC Museum)

Once the fossil was discovered, Ball contacted the Vancouver Island Palaeontological Society who discussed the finding with him and confirmed that the ancient remains were likely a turtle.

Ball then contacted the RBCM and BC Fossil Management Office, who helped with excavating the fossil.

The museum says that the fossil was retrieved thanks to funding from the BC Heritage Branch and from BC Hydro, who made sure that the river's water levels stayed low so that the fossil could be excavated.

"Russell Ball and the Vancouver Island Palaeontological Society did everything right," said Larson.

"They recognized the discovery’s significant scientific value and immediately set to work ensuring the fossil would end up where everyone in B.C. will be able to access and study it," he said.

The fossil has since been collected by the RBCM, and the museum's palaeontology team is busy trying to identify the ancient turtle.

Larson says he's grateful for the efforts of Ball and encourages other community members to keep an eye out for fossils on Vancouver Island.

"Without Ball and the other volunteers who helped out, we may not have found this specimen and certainly we would not have been able to extract the fossil so quickly," he said.

The Courtenay man is not the only Vancouver Island resident to have discovered a fossil on the island.

In 2020, a 25-million-year-old fish fossil was named after an island collector who found the fossil in Sooke.

That same year, fossilized dinosaur ribs were excavated from a river near Courtenay, where they are believed to have sat for roughly 85 million years.