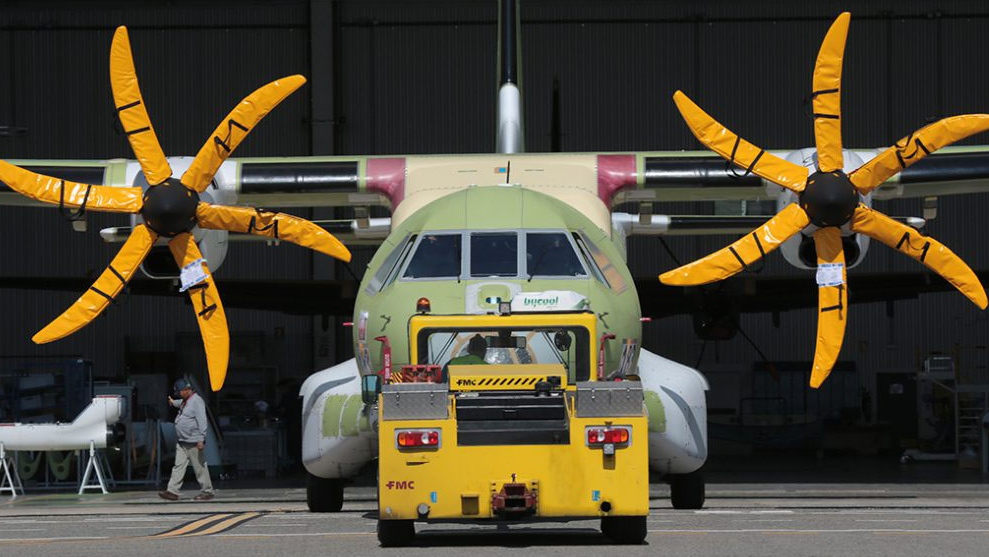 On March 8, 2019, the first of 16 new CC-295 fixed-wing search and rescue aircraft rolled off the assembly line in Spain. (Royal Canadian Air Force)

The Royal Canadian Air Force is re-launching a long-dormant air squadron, moving it to Vancouver Island and looking for the public's help in naming its signature plane.

The RCAF's 418 Squadron, a former fighter-bomber squadron based out of Edmonton, will be reformed as a search and rescue training squadron at CFB Comox.

“I am very excited to play a part in bringing the CC-295 to Canada,” said Jeffers in a statement Thursday.

“We have a very talented, hard-working team who are ensuring that this extremely capable aircraft will be utilized most effectively."

The government ordered 16 of the large propeller planes from Airbus in December 2016 to replace the Buffalo and H-model Hercules planes that currently fill the air force's search and rescue role.

The first CC-295 is expected to be delivered from Spain later this year and will take to the skies over Canada in the spring of 2020, according to the Department of National Defence.

The new aircraft will be stationed at Comox, Winnipeg, Trenton and Greenwood, with Comox serving as the central training site. But not before the air force gives the CC-295 its so-called "popular name."

On Monday the RCAF rolled out a short list of five approved names for the new search and rescue craft, perhaps taking a lesson from Britain's Natural Environment Research Council by not opening up the naming to write-in ballots.

In 2016, the research council held a public contest to name its newest arctic research vessel. The contest went viral when a write-in suggestion for "Boaty McBoatface" garnered overwhelming support from the public, forcing Britain's science minister to intervene and reject the name, much to the chagrin of the internet.

The approved names for the RCAF's newest plane are Canso II, Guardian, Iris, Kingfisher and Turnstone, which the public is now being asked to vote on.

Canso aircraft were submarine hunters and patrol planes serving on both coasts during the Second World War.

Iris is a goddess of the sea and sky in Greek mythology, and also refers to eyesight.

Kingfisher is an aquatic bird found across the country, recognized for its speed, agility and keen hunting skills.

Turnstone is a migratory Arctic bird known to fly more than 1,000 kilometres in a single day, according to the Defence department.

The winning name is expected to be announced in the coming months, with the RCAF Commander Meinzinger getting the final say.

The 418 Squadron was first formed in 1941, flying night fighter and counter-intruder operations over Britain, France, Belgium and the Netherlands during the Second World War.

The squadron remained in Germany until it was disbanded in 1945 and subsequently reformed in Canada in 1946 as 418 Fighter Bomber Squadron, flying bomber patrols in the Canadian North.

The squadron was briefly re-designated as a transport and rescue squadron in 1993 before it was disbanded the following year.

The 418 Search and Rescue Operational Training Squadron will begin operations next year.