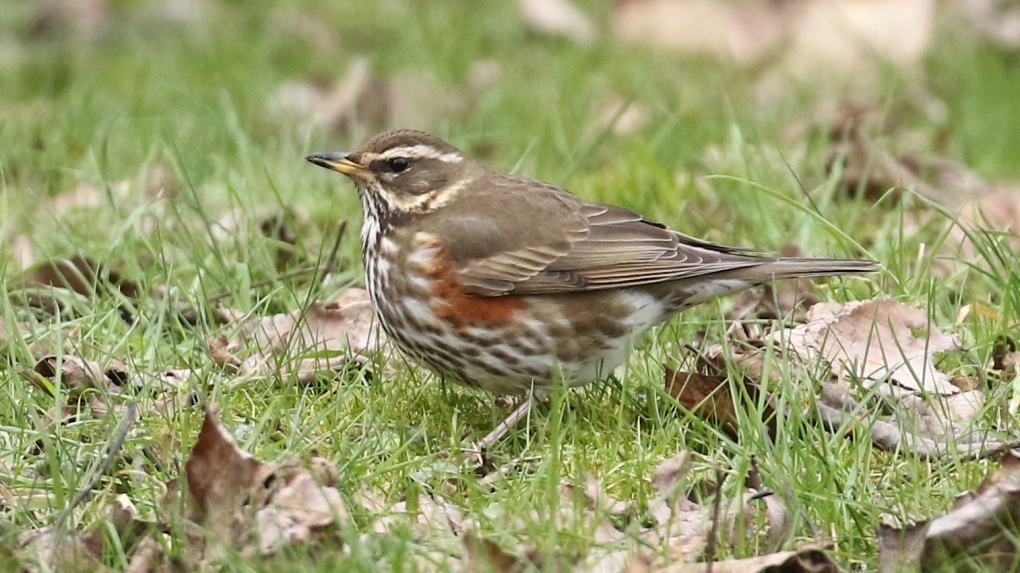 The redwing is pictured in Saanich: (Liam Singh / BC Rare Bird Alert)

A Redwing, which is a species of thrush that lives mainly in Asia and Europe, was first spotted in the Hamsterly Park area of Saanich near Elk Lake in February, according to bird watchers.

"It was first spotted on Feb. 10, and I was actually the first one to spot it," said Jody Wells, a Vancouver Island bird watcher.

"It's quite a (sic) skulky bird," he added. "Lots of other people have been able to get good shots, but not me."

Wells says it’s only the fourth time that a Redwing has been confirmed to be spotted in British Columbia. One of the previous sightings occurred on Vancouver Island "a few years ago," says the bird watcher.

The bird, which is about the size of a robin, has survival habits and diets similar to local robins and varied thrush, another species of thrush. That's one of the reasons why Wells thinks the bird has stayed on the island for more than a month.

"So, when it landed here it must have liked the different food items that it could get here," he said.

Wells says he expects the bird to return to Asia in the next two weeks to a month, once it is finished wintering.

He says it's uncertain how the Redwing ended up here, though there are two main theories.

One theory is that it got lost on its seasonal migration but found adequate food supplies here. The other theory is that it is the offspring of the last Redwing that was spotted on Vancouver Island several years ago and returned here out of genetic memory.

The bird's rare sighting on Vancouver Island has attracted many bird watchers to the Elk Lake area. Wells says that it was exciting to see young bird watchers interested in the animal.

Wells says his eight-year-old grandson, Jaxson, also got to see the Redwing with him around Elk Lake.