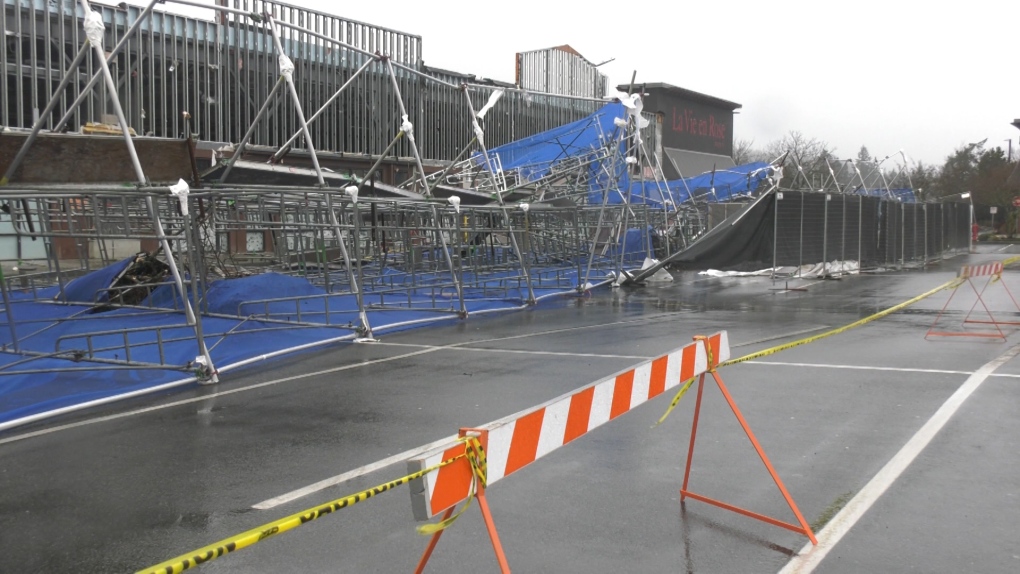 One casualty of the strong winds was the scaffolding outside a business on Millstream Road. (CTV)

Environment Canada issued the warnings around 11 a.m., saying strong winds that could cause damage were occurring across the two regions.

By 5 p.m. thousands of people across Greater Victoria were without power, according to BC Hydro's online outage list. Most of the outages listed had either downed trees or wires as their cause.

Southwest winds between 60 and 90 km/h were forecast to develop across Greater Victoria, the weather agency said, adding that gusts as strong as 100 km/h could occur on the Island's west coast.

High winds could cause damage to buildings, including to roof shingles and windows, Environment Canada said.

One casualty of the strong winds was the scaffolding outside a business on Millstream Road.

Witness Ibrhim Hamcho said he heard a loud noise and saw part of the scaffolding collapse.

"I just see a lot of cars stop by and people taking pictures," Hamcho said. "It was crazy. It was unbelievable."

BC Ferries sent out a travel advisory about the wind, but did not cancel any sailings Sunday.

Winds were expected to ease overnight as the storm tracks inland, the agency said.