Person of interest identified after kitten thrown in Victoria garbage

Victoria police are looking for a person of interest after a weeks-old kitten was left for dead in a mall garbage can.

Police released surveillance images of a man Wednesday that they may have information in the case of the abandoned cat discovered June 4 at Hillside Shopping Centre.

The man is seen wearing a dark-coloured hoodie, jeans and white shoes, and is walking with a distinct hunch.

Police also released an image of a dark-grey SUV, possibly a 2010 Ford Escape, they believe is linked to the case.

The kitten was found trapped inside a small shaving bag by Brian Boria, a maintenance worker at the mall.

"It ingested it somehow, whether through accidental ingestion or somebody fed it," said Victoria Animal Control Services officer Ian Fraser after the kitten was discovered. 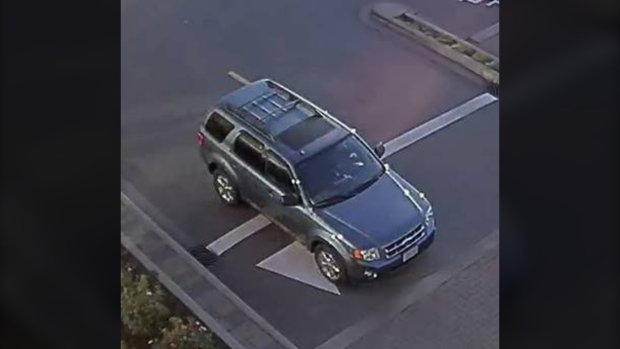 The kitten has since been named Lily and she's doing "really well" in recovery, said Boria, who visits her frequently.

"She has made a new friend and is bullying two dogs by stealing their toys," he told CTV News. "She just figured out how to use the stairs and was playing for hours."

The BC SPCA says with enough evidence, investigators could recommend criminal charges if someone intentionally left the cat for dead.