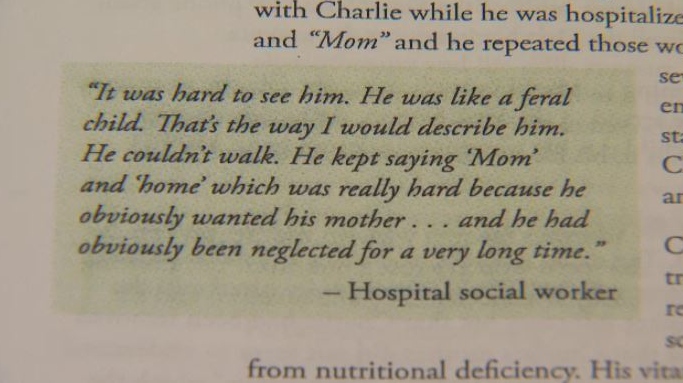 An excerpt from the report by B.C.'s Representative for Children and Youth Jennifer Charlesworth, titled 'Alone and Afraid: Lessons learned from the ordeal of a child with special needs and his family.' Dec. 10, 2018. (CTV Vancouver Island)

On the heels of a gut-wrenching report by B.C.'s children's watchdog, parents of children with special needs on Vancouver Island are speaking out about their own challenges navigating the system.

The 124-page document details years of inadequate services to address the complex needs of a boy from the Lower Mainland, who is being called Charlie.

Police found the non-verbal autistic child home alone in January 2016 screaming, severely underweight and in a state of neglect, despite multiple interactions with the Ministry of Child and Family Development and the health and school systems over 10 years.

“Some of the first responders who found Charlie alone – naked and filthy, unable to walk and living in a bedroom covered in garbage and feces – were traumatized,” said the Representative for Children and Youth, Jennifer Charlesworth.

She’s calling for an overhaul of the system that supports children with complex needs, making a total of 11 recommendations.

“It needs to take priority and it needs resources to have that priority,” said Rick Fitzzaland. He’s the executive director of The Federation of Community Social Services of B.C. and father to two autistic sons who were adopted. “I know the system. I’ve worked in the system. I know it and yet it’s difficult to navigate.”

“The sooner we can implement these recommendations, the less likely that children will be in situations like this little boy was,” said another parent.

Catherine Nash says her son has autism, Down syndrome and other health issues.

"What I’ve found is we’ve had to advocate for him his entire life," she said.

Nash said as a parent of a special needs child, you get tired and there are years when you face more challenges.

“During those times, I can understand why parents may be too tired to reach out or too tired to fill out forms or re-enroll for autism funding or insist on getting certain services at school, because it’s hard work.”

In Charlie’s case, the investigative report finds his mother was largely a single-parent, living in poverty, facing her own mental health and substance use issues.

“Somebody asked me: Did this Mom love her child?” said Charlesworth, “And that is not the kind of question that I think is ours to ask. There was lots of indication that this mom was doing the best she could, but there were many things that were getting in the way of her being able to provide the services and supports.”

By the time Charlie was removed from his mother’s care in 2016, MCFD had received a total of eight formal reports from different sources concerned about the boy’s wellbeing. Despite that, the report finds no MCFD social worker ever laid eyes on the boy as part of a child protection response until the day he was pulled from his mom’s care.

“It's simply inexcusable,” said the Minister of Children and Family Development in a statement.

“The failings outlined in this case must be addressed. They are against policy and the province needs a system that ensures social workers are able to put eyes on kids who are the subject of protection concerns. Investigations must be complete, including seeing the child of concern, before closing a file,” added Katrine Conroy.

The ministry is among three mentioned in the recommendations. Conroy said she’s tasked the provincial director of child welfare to determine the next steps to make sure those on the frontlines are able to respond to the needs of kids and families.

“When mistakes are made, we need to collectively step up and be accountable,” she said.

Charlie showed signs of developmental delay before he was three, but wasn’t diagnosed with autism spectrum disorder until well after his sixth birthday. One of the recommendations is for the Ministry of Health and MCFD to develop a plan to ensure early identification, timely assessment and appropriate supports.

The representative also calls on an integrated service delivery model to better information sharing between the Ministries of Child and Family Development, Health and Education and to offer case workers to families with special needs to better navigate the system.

Yet another concern for Charlie is that he missed more than 100 days of school over two school years before he was withdrawn for homeschooling in 2011. Concerns had been voiced to MCFD about his chronic absences and questions around the education he may have been getting -- but despite an open file on the family, the investigation found its members received little in the way of services.

The Ministry of Education is now being asked to develop protocol to address chronic, unexplained absences.

“Charlie’s father, who was interviewed by our investigators a number of times, put it best when he said let’s not let this happen to the next child that’s going to be going through this and the next family that has to go through this,” said Charlesworth.

The report says Charlie stayed in hospital for six weeks after the police intervention in 2016, which led to his removal from his mother’s care. He was 12. He weighed 65 pounds when he was admitted, which is about 35 pounds less than the average weight considered healthy for a person that age. He was diagnosed with social neglect, failure to thrive and tooth decay.

Charlie’s mom was temporarily detained under the Mental Health Act and is no longer in his life.

His father, brother, paternal grandmother and relatives had created a family plan so Charlie could be placed in their care – but eventually found the level of support he needed was greater than what they could provide.

Today, Charlie is 15. He lives in a foster home. He’s back in school and “doing comparatively well.”

The full report can be read here.