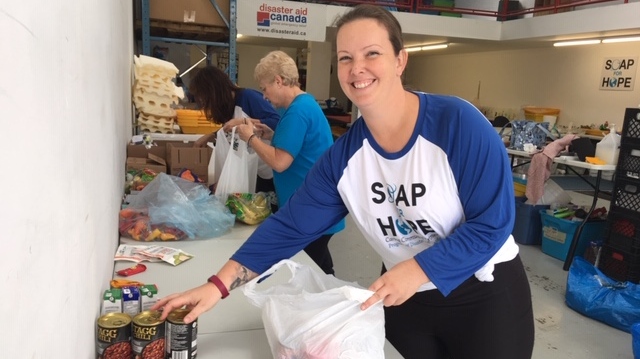 Volunteers fill bags with easy-to-make nutritious foods for youth who may go hungry over the weekends: Sept. 27, 2019 (CTV News)

A new program launched in Victoria on Friday to help feed hungry elementary school kids on the weekends.

It’s called Backpack Buddies and it was originally established in Vancouver in 2012.

Joanne Griffiths, Executive Director of Backpack Buddies, said she saw an overwhelming need in her child’s school to help children who may receive meals from the school system at lunch, but suffer from a lack of food at home over the weekend.

“There is an emergency of kids not having food on the weekends,” said Griffiths. "It’s a crisis and when kids go to school hungry on Monday morning they cannot function.”

The program started with delivering 20 backpacks on Vancouver’s downtown east side in 2012. Now, the program delivers 4,000 bags filled with nutritious meals weekly in Vancouver.

The program's expansion to the island will start with delivering 500 bags of food to three schools in the Greater Victoria area. But, Backpack Buddies estimates that there are up to 10,000 students in need around the region.

“It truly is a hidden crisis,” said Griffiths. “We are truly thrilled to bring this program to Victoria.”

The food that is handed out is generally easy to cook food because the group recognizes that often in these situations, parents aren’t around on the weekends to cook for their kids.

“Parents are often working many jobs and just aren’t always around,” said Griffith. “That’s why we focus on easy to prep foods so children can easily feed themselves.”

Backpack Buddies has partnered with Save-on-Foods, where often one-dollar from donations can purchase up to three-dollars worth of food.

If you would like to find out how to donate you can go to their website here.