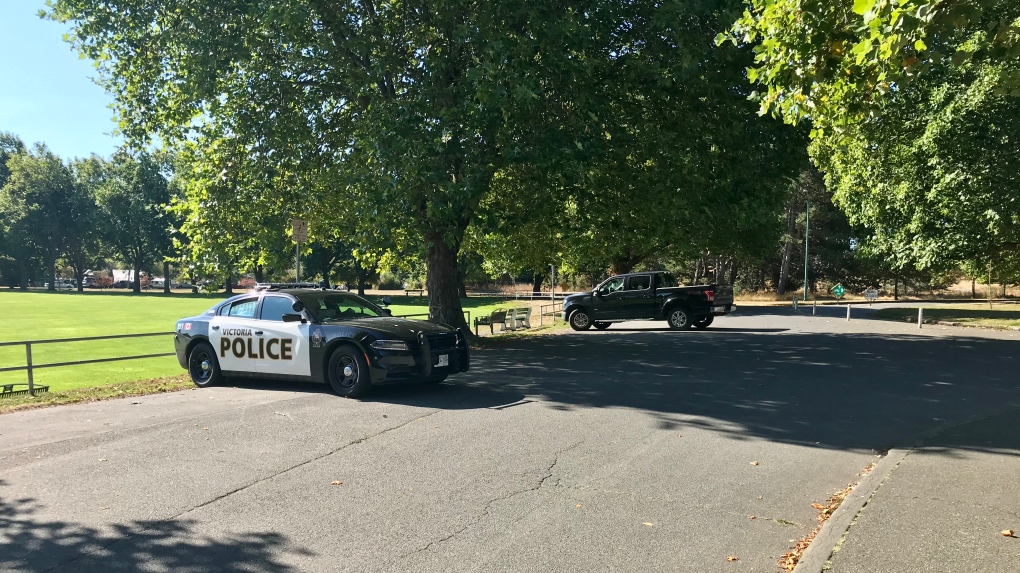 A Victoria Police vehicle is seen at Beacon Hill Park in this file photo: (CTV News)

VICTORIA -- Victoria police say a missing teen was taken to hospital with serious injuries after they were allegedly assaulted and choked inside of a tent in Beacon Hill Park on Tuesday night.

Paramedics and firefighters were first called to the scene near Douglas Street and Circle Drive around 10 p.m. The first responders learned that a 15-year-old had been assaulted and choked and called VicPD officers to the scene, according to police.

The youth was suffering from potentially life-altering injuries but was not in life-threatening condition when they were found.

When officers arrived, police say several campers were in the area trying to prevent the teen from speaking with police or receiving medical attention.

"When officers attempted to speak with the victim, numerous people who are camping in the park began to intervene, urging the victim to not speak with officers, to not go to hospital for medical treatment, and to leave the area," said Victoria police in a statement Wednesday.

Police say that bystanders tried to grab the youth and lead them away from the first responders before a struggle erupted between police, campers and the teen.

VicPD officers then called for backup as one officer was bitten and another spit on while trying to move the youth to an ambulance, say police.

Eventually, the teen was brought to an ambulance and was taken to hospital by first responders. Later, police say they learned that the youth was developmentally delayed and had been reported missing before the incident occurred.

"Other officers were working to locate the victim at the time they were discovered in Beacon Hill Park," said the police department.

VicPD says a 38-year-old suspect has been identified in the incident, but was not in the area when officers arrived. Investigators continue to search for the man, who has a history of assault charges and breaching court-ordered conditions, say police.

Investigators say they do not believe there is an increased risk to the general public while the man is at large.