It’s a harrowing aviation tale that could’ve ended much worse.

A Qualicum Beach man and his son had to be rescued from a remote beach after their ultralight plane crashed off B.C.’s central coast.

Gunter Schlichting and his pilot son, Frank, were flying from Port Hardy to Bella Bella Monday afternoon when bad weather forced them to circle back.

“Frank said we have enough fuel to get back to Port Hardy no problem, but then when we went towards Port Hardy, he found out there was a very heavy headwind,” Gunter recalled of the ill-fated flight. “We had the clouds below us, and finally he said ‘Well, we can’t make it to Port Hardy,’ so he called in 'Mayday.' That’s when I knew things were serious.”

Even worse, the aircraft started to run low on fuel.

Realizing he wouldn’t make it back to the North Island town, Frank began searching for a suitable clearing to land the tiny aircraft.

The sandy shores of a remote beach below looked like an ideal landing spot, but as he pulled closer, Frank’s heart sank.

Huge boulders on the beach meant it was too risky to land the plane there – and he was forced to make an emergency landing in the ocean.

“I was about 100 metres from shore and we just put the plane down, flew as slow as it can go, and the tail touched,” he said. “It actually skipped once and then it landed in the water standing up, which is unusual. It came down really nice.”

From there, the father and son had only one choice left: swim through a thick bed of kelp to shore.

“I had no time to grab my headset. We looked around and both exited the aircraft, and then we swam about 100 metres to shore,” Frank said.

“When I was swimming I was surprised,” said Gunter. “I expected the water to be much colder. I thought, wow this really isn’t as bad as I thought.”

But the frigid water started to take its toll on the soaking wet men once they got to shore – stoking their fears that they would be in for a long, damp and cold night.

“I started shivering shortly after and felt cold,” Gunter said. “My worry was if no one picks us up and we have to spend the night there, we would be in a serious problem.”

Desperate to be found, the men fashioned a flag out of two white plastic bags and waved it at a helicopter they spotted in the distance – but it veered off and missed them.

A rescue helicopter flew near them a second time, about an hour after the plane crashed.

This time, Gunter used a piece of a landing gear panel to reflect sun to try to get its attention.

It appeared to work.

“Next time we saw a helicopter he was waving, and I was waving,” Gunter said.

A CH-149 Cormorant crew had flown to the area, near Goose Bay, thanks to information provided in Frank’s Mayday call and the plane’s last position on radar.

But it wasn’t the reflection they saw.

The Cormorant picked the men up from the beach and flew them to Port Hardy, and they were then transported to Comox in a CC-115 Buffalo, according to 19 Wing Comox.

Frank, who posts videos of his aerial adventures on his YouTube channel, joked that he could now upload footage of the tense crash.

Neither of the men suffered any injuries in the crash.

The plane remains at the bottom of the bay. 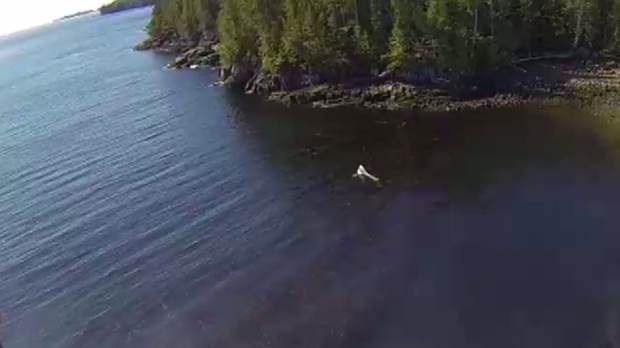