Martin Mars takes flight again, but are its days numbered?

The Martin Mars water bomber has taken to the skies for the first time this year, but some are wondering whether it'll be one of the iconic plane's final flights.

Coulson Aviation has invested $1-million to fly the aging air tanker to the world’s largest airshow in Oshkosh, Wis. later this month.

Visitors to Port Alberni have been stunned to see the plane parked on Sproat Lake this week as it prepares for the eight-hour trip on July 23.

“This is a big undertaking for us,” said Coulson project manager Mayco Noel. “We’ve been working on the aircraft for the last 90 days, with some engine repairs, some sheet metal. So it’s been, definitely, a big investment for us.”

Built in the 1940s and with a wingspan of 61 metres, the Mars is the largest aircraft of its kind still flying today. 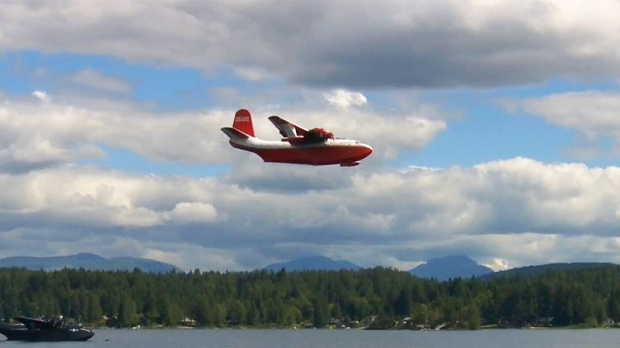 The Mars was used to fight fires just last summer at Skutz Falls in the Cowichan Valley, after major public outcry prompted the province to sign it to a temporary contract.

That contract expired last August, with the plane being used five times and dumping one-million litres of water at a total cost of $736,000.

Aviation enthusiast Kermit Weeks, who owns one of the world’s largest private vintage airplane collections, is footing the $40,000 gas bill in exchange for piloting the mammoth machine south of the border.

“My personal thing here is I truly believe I’m being part of history,” said Weeks. “Kind of at the end of the swan song of the airplane’s history, unless it goes to another owner. I have my doubts whether or not the airplane will continue flying.”

With an approximate cost of close to $1-million per year to maintain the tanker and airbase as well as to pay employees, this week’s test flights could be the beginning of the end for the Mars on Sproat Lake.

“It’s hard not to get emotional for people when you see it flying around,” said Mayco. “If you live in B.C. or grew up in B.C., everyone has a story.”

After its previous contract expired in 2013, the B.C. government replaced the bomber with four Fire Boss skimmers that carry about 3,000 litres of water each and are contracted for $2.5-million per season.