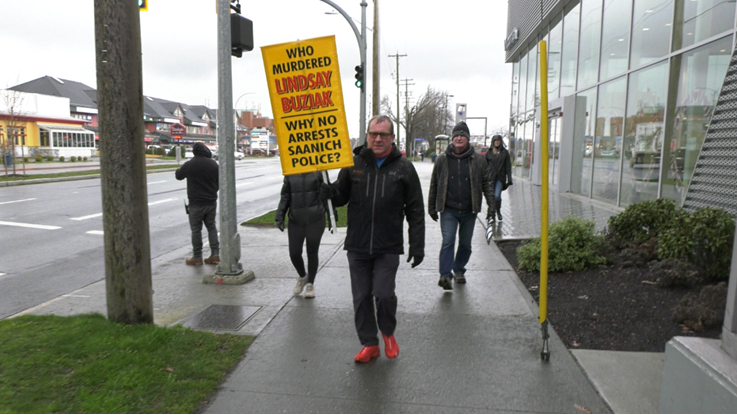 Jeff Buziak is pictured on Douglas Street on his 13th annual Walk for Justice in memory of his murdered daughter: Feb. 2, 2021 (CTV News)

VICTORIA -- On Tuesday, the father of murdered Victoria realtor Lindsay Buziak walked from Saanich Municipal hall to the steps of the B.C. Legislature in honour of his daughter.

Jeff Buziak’s daughter, Lindsay, was showing a home in Saanich when she was brutally murdered on Feb. 2, 2008. Her murder remains unsolved.

“I’m here for the 13th time to walk for justice for my daughter, Lindsay, and it’s a heavy-heart time,” said Buziak. “It's way too long without justice so I’m here to remind Saancih police that the case is unsolved.”

In a statement released on Jan. 31, Saanich police said a new investigative team was established in an effort to solve the 13-year-old murder case. The team will include representatives from the Federal Bureau of Investigation (FBI) with the continued support of the RCMP.

In the statement, Saanich police Const. Markus Anastasiades said new technology developed since Lindsay’s death has highlighted additional leads and forensic evidence. He says genealogy and DNA analysis has led to the solving of many other cases.

“Hopefully they do what they say they are going to do and we have some results,” said Buziak. “I’ve lost the meaning of hope over these last 13 years, but I have to try and stay optimistic that Saanich police are doing something, so I’m going to hold them accountable.”

The COVID-19 pandemic prevented Buziak from promoting this year’s walk due to restrictions on public gatherings. He had planned to make the trek from the municipal hall to the provincial legislature alone, but a handful of supporters joined him on his journey.

“Because we’re in a COVID situation I didn’t do any organization for the walk this year,” said Buziak. “It hasn’t held me back in any way whatsoever, to keep on pushing for justice for Lindsay.”

Buziak says the walk is a symbol to the community that he remains relentless in his quest to find the people who murdered his daughter.

“I think what my walking does is it keeps the reminder that this murder is unsolved, and we can’t forget about it because there’s murderers and conspirators out there living in this community,” said Buziak. “We needed arrests and charges in Lindsay’s murder a long time ago.”