Warning: This story contains graphic images that may disturb some viewers.

For the 13th time in the last decade, a human foot has washed up on B.C.'s coast.

Mike Johns was walking his dog along the scenic coastline of Jordan River on southern Vancouver Island Thursday when he made the startling discovery.

"She was sniffing the bones so I stopped and took a look, and I saw the bones and noticed it was attached to a shoe," said Johns.

A human fibula, tibia and complete left foot were intact inside a black Velcro shoe, sitting on a bed of kelp.

"By the looks of it, the foot was totally intact. The ankle bone still worked and the bones were attached at the base of the knee," he said.

Johns, a seasoned hunter, took the remains home with him before calling RCMP.

Sooke RCMP and the BC Coroners Service took the remains and have since confirmed early analysis indicated they are human.

"It's an ongoing investigation. There's no risk for the public at all," said Const. Sean Heidman of Sooke RCMP.

The coroner's office said the leg will be tested to determine the identity of the deceased, how they died and whether it was accidental, a suicide or if they met with foul play.

The evidence will then be turned over to the RCMP.

Last year, a similar gruesome discovery was made about 40 kilometres west of where Johns found the foot.

"Eight of the previous 12 feet have been identified belonging to six different individuals," said Andy Watson of the BC Coroners Service.

Johns said he figured the shoe was roughly a size five. He said as grisly as the find was, he hopes it helps end a mystery for a loved one.

"Hopefully get some closure for the families involved," he said. "If they are looking for somebody, maybe this will close a chapter for them." 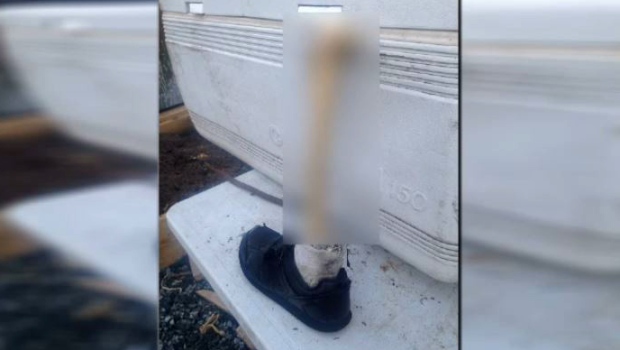