Height exemption sought for Howard the Gnome in Saanich 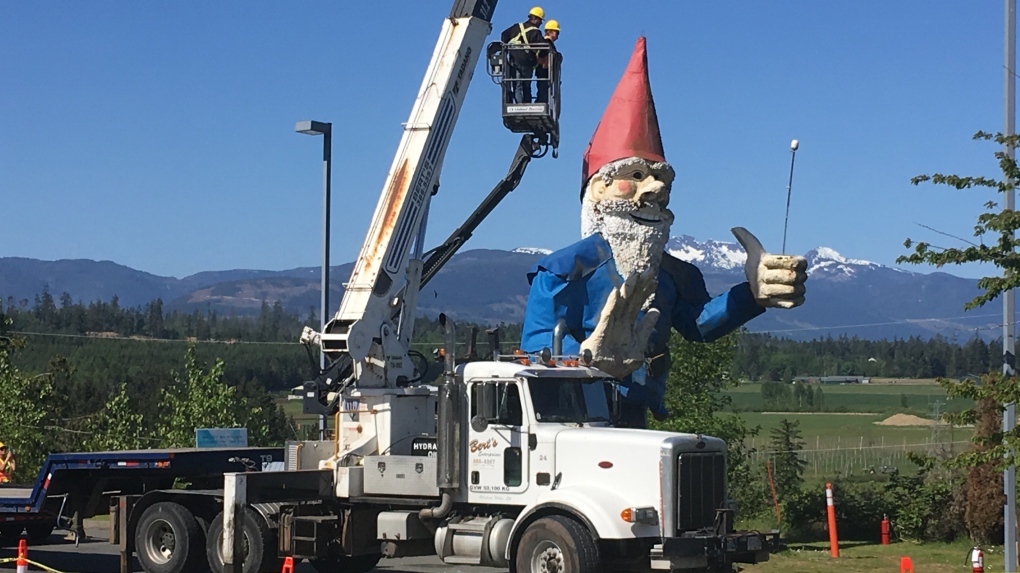 Howard the gnome was dismantled in preparation for his big move to Galey Farms in Saanich Thurs., May 9, 2019. (CTV Vancouver Island)

Howard, the world's tallest gnome, will hopefully be allowed to stand at his new home on Galey Farms this fall.

The massive eight-metre gnome statue ran into challenges when it was first transferred down to Saanich in May.

Howard's height was slightly too tall for the Saanich regulations regulations, which limit the size of attractions to 7.5 metres in height.

Not wanting to reduce Howard's record-setting size, Galey Farms turned to Saanich council with a revised installation plan. Howard would only stand at the farm for three weeks of the year, during the farm's popular Fall Harvest Festival, and would hopefully receive an exception for its half-metre height variance.

"[Saanich] has been so awesome to work with," said Galey. "They've helped us get through all the processes and with getting all the applications in."

"Nobody has said anything bad about Howard," he added. "Thanks for everybody that's given all their support."

Galey is scheduled to present his request before council on Sept. 9. If all goes well, Howard could be seen on the property by the start of October, just in time for the bustling autumn season.

Besides some much needed repairs, Galey Farms is adding a number of additions to the Guinness World Records-certified statue.

The gnome already has new blue electronic eyes and is being outfitted with a robotic arm that can wave to guests. He'll also feature additional LED lights that will illuminate the area until 10 p.m. each night.

Before moving to Galey Farms, Howard stood off the Island Highway in Nanoose Bay.

He was first constructed in 1998 to attract customers to a family amusement park that used to operate in the area. Twenty-one years later, after falling into disrepair, the property's new owners, a gas station, told the gnome's original makers that it would be torn down due to safety concerns if it was not moved.

"Everybody's going to love to see him now that he's all fresh and finally taken care of," said Galey.