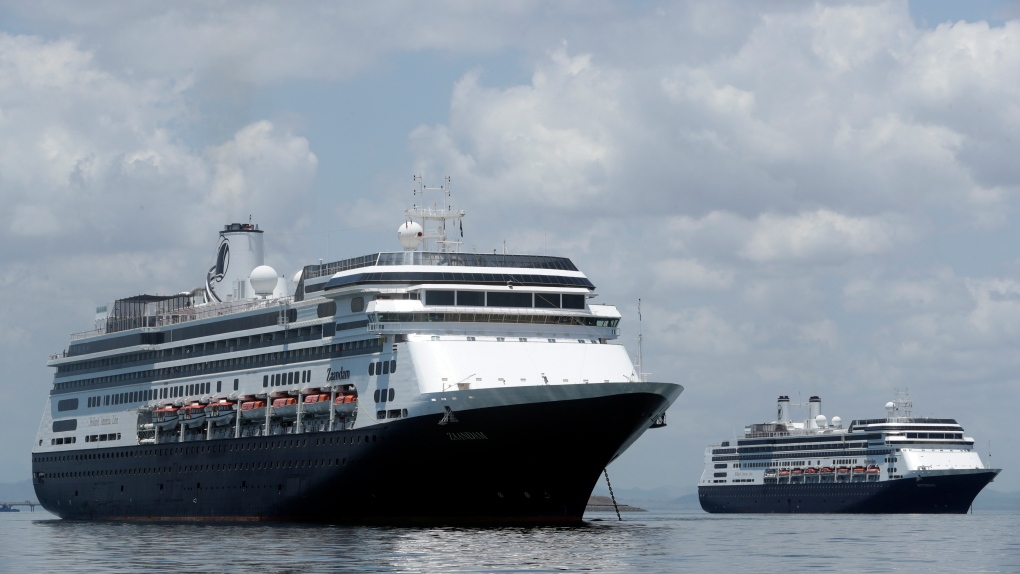 The Zaandam cruise ship, left, carrying some guests with flu-like symptoms, is anchored shortly after it arrived to the bay of Panama City, Friday, March 27, 2020, amid the worldwide spread of the new coronavirus. (AP Photo/Arnulfo Franco)

VICTORIA -- Just days after returning home from a cruise on which four fellow passengers died during an outbreak of the novel coronavirus, more than 240 Canadians aboard the MS Zaandam were told their privacy had been breached by the federal government.

Norma Kirkham was still aboard the Holland America Line cruise ship off the coast of Florida on April 1 when she received an email from Global Affairs Canada. It outlined the agency's efforts to convince state and federal authorities to finally allow the virus-stricken ship to dock and let the Canadians aboard disembark after weeks of uncertainty at sea.

It came as a relief. The passengers would be allowed off the following day, having been denied entry at various ports since March 14.

Minutes after getting the email, however, the Vancouver Island resident received another – this one asking her to delete the previous message immediately.

"So I thought, well what did they send?" Kirkham told CTV News on Tuesday. "I scrolled to the very bottom of the email and sure enough there was the Excel spreadsheet with all the personal information on it."

The federal government had inadvertently shared a passenger manifest with every Canadian aboard the Zaandam, including their names, dates of birth, home addresses, phone numbers and passport numbers.

"I was concerned," Kirkham said.

In a follow-up email Global Affairs Canada sent to passengers on April 10, the agency blamed an "administrative error" for the privacy breach, and encouraged passengers to monitor their banking accounts and request credit reports for the next 36 months to prevent identity theft.

"All the onus was on us to be vigilant, to be checking our credit rating," Kirkham said. "There was certainly nothing from Global Affairs saying, 'This is what we are going to do for you. We made an error and we will fix it.'"

Kirkham had already shared the email containing the manifest with her son, and suspects others aboard likely forwarded it to family and friends as well.

Her husband, David Kirkham, is demanding the federal government issue the couple new 10-year passports and provide credit monitoring, free of charge. "This is potential identity theft and we just want protection," he said.

In the April 10 email to the affected passengers, Global Affairs Canada said "in response to this incident, a small unit has been established" to handle communications with the passengers, saying "by building expertise and strict business processes within this team, we are confident that we will avoid additional errors of this nature."

The notice advises passengers to "remain vigilant about suspicious activity" and place fraud alerts on their financial accounts to prevent new accounts from being opened in their names.

"Global Affairs should have apologized and that letter that they sent was not a letter of apology," Mitchell said. "I would like to see a little responsibility taken there."

Like the Kirkhams, Mitchell is also asking for a new passport and complimentary credit monitoring, calling the whole ordeal of the cruise and its fallout "difficult psychologically."

In the meantime, Mitchell has filed an official complaint with the Office of the Privacy Commissioner of Canada.

“The Government of Canada makes every effort to protect the privacy of Canadians by limiting the amount and specificity of information disclosed without consent to what is strictly required given the circumstances," said Global Affairs Canada in an emailed statement.

'I was horrified': Family had to rush woman out of Toronto care home struck by COVID-19

Ontario public schools will not reopen on May 4, premier says

What does COVID-19 look like? A closer look at the grey and red image that symbolizes a pandemic

How to look and sound your best while video conferencing

New Normal: Will COVID-19 mark the death of the handshake?