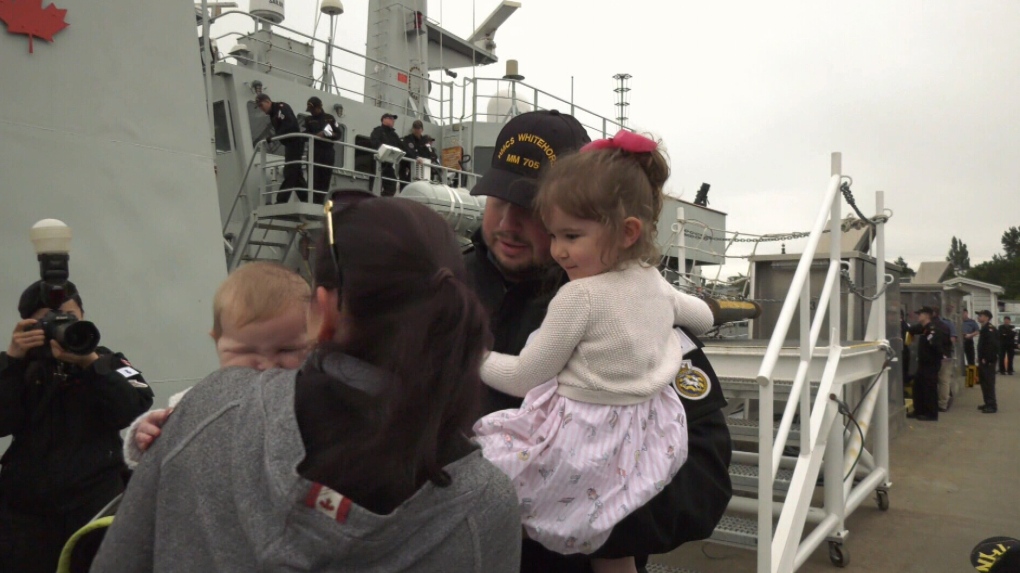 An emotional homecoming as HMCS Whitehorse and HMCS Yellowknife return to port on May 16, 2019. (CTV Vancouver Island)

Family and friends were waiting in anticipation at the docks of CFB Esquimalt today, eager to welcome home the crews of HMCS Whitehorse and HMCS Yellowknife.

The two Canadian naval ships were on a two-month drug trafficking intervention operation off the shores of Central America.

The 90 Canadian sailors were part of Operation Caribbe, working alongside the U.S. Coast Guard. The vessels seized 2,657 kilograms of cocaine and 55 pounds of marijuana.

“When we take a kilogram of cocaine off the streets in North America, that represents a social benefit to our country,” said Lt.-Cmdr. Donald Thompson-Greiff on Thursday.

“It stops our youth, our children and our families from being affected by what drugs do to people when it comes up here to Canada.”

The ceremonial first kisses for the returning sailors went to two little girls waiting on the docks to greet their dads.

Among those waiting for the returning sailors was 10-year-old Xander Thompson-Grieff, who had skipped school for the day to greet his dad.

“It's been three months since I’ve been able to see him and I’ve just been waiting for such a long time,” Thompson-Grieff said.