VICTORIA -- After a weekend of heavy snowfall on Vancouver Island, Environment Canada has lifted all snowfall warnings in the region.

On Saturday and Sunday, several centimetres of snow fell over Vancouver Island. On Monday morning, Environment Canada still had snowfall warnings posted for the island.

However, by Monday afternoon, all weather warnings had been lifted.

Unsurprisingly, the Malahat area saw the most snow this weekend, with 41 centimetres recorded over Saturday and Sunday. 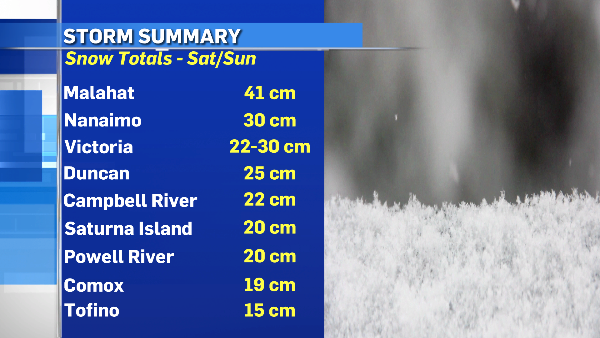 The weekend's snowfall broke many single-day records on the island as well. On Feb. 13, Victoria saw 16 centimetres of snow, obliterating the previous record of 3.8 centimetres recorded on Feb. 13, 1930.

Duncan also broke its Feb. 13 snow record, with 13.6 centimetres recorded Saturday, well above the previous record of 5.1 centimetres set in 1922.

While snowfall has stopped across the island, previous buildups have caused problems for Canada Post. On Monday, the organization said that some deliveries would be delayed or postponed in more than a dozen Vancouver Island communities.